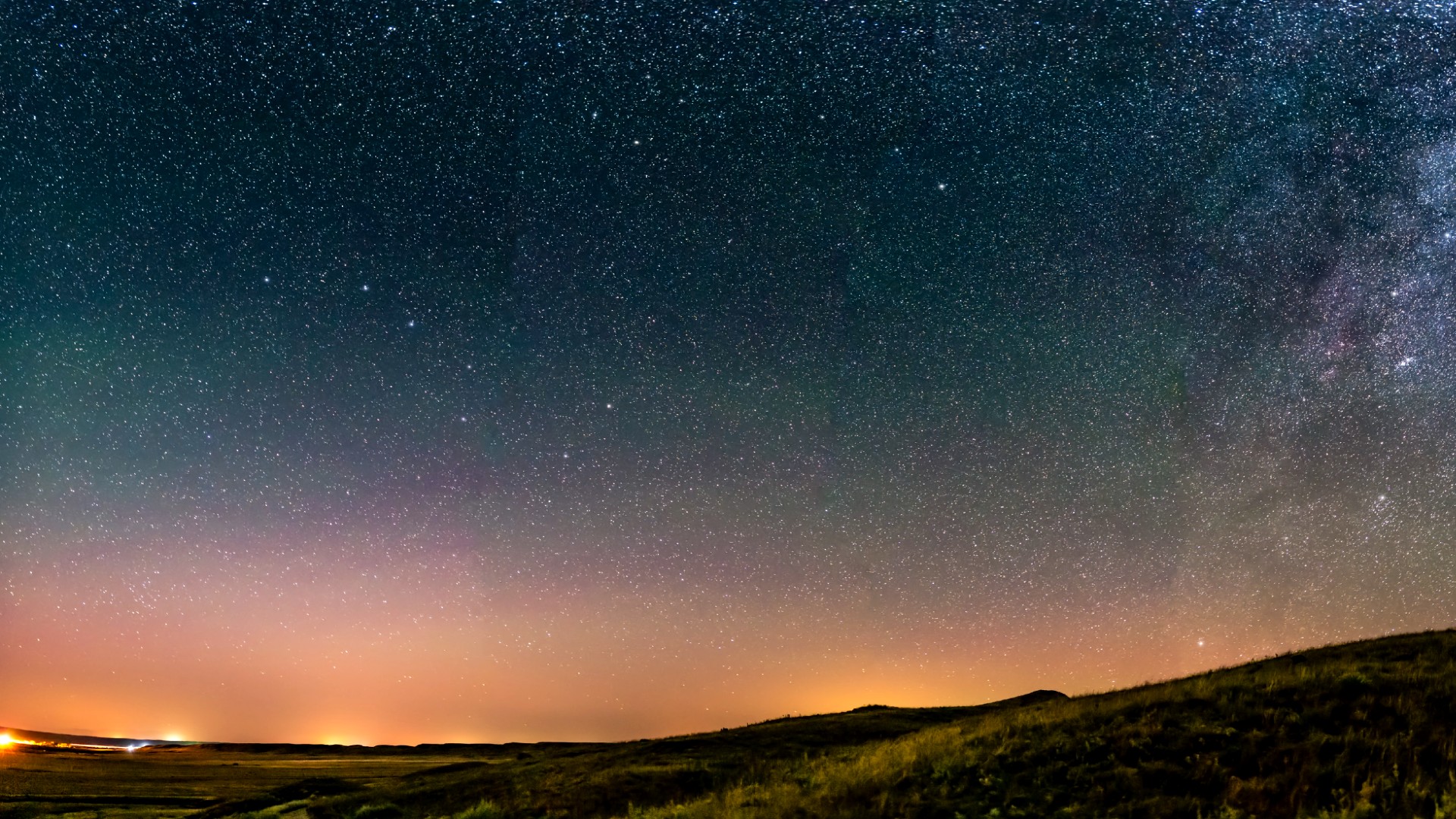 As the Earth completes one turn on its axis every 23 hours and 56 minutes, the sky seems to wheel overhead. To sky watchers in the north temperate zone, the stars that are near to the north celestial pole constantly remain in view as they sweep around, while stars near to the celestial equator appear to rise and set.

Several star patterns are arranged around the pole and not very far from it. These are the circumpolar constellations. They can appear high or low in the sky as they wheel around the North Star (Polaris) but they never rise or set and can be seen anytime of the year. As viewed from latitude 40-degrees north Ursa Minor, Cassiopeia, Cepheus, Draco and Camelopardalis are constellations that fall into this category.

However, the two most conspicuous constellations whirling in their nightly course in the northern skies are the Big Dipper and the “W” of Cassiopeia the Queen, and Friday evening (Oct. 14) is a perfect time to see these two.

Related: Night sky, October 2022: What you can see tonight [maps]

One of the most famous constellations is the Big Dipper, a very popular star pattern (known in Great Britain as “The Plough”) which falls into the category of an asterism — not an official constellation in of itself, but a prominent part of the constellation of Ursa Major, the Great Bear. The star located at the end of the Dipper’s handle (Alkaid) briefly drops just below the northern horizon from latitude 40 degrees north for 66 minutes each day, so the Big Dipper cannot be considered circumpolar for Philadelphia.

But for New York City, located 80 miles (130 km) to the northeast, Alkaid appears to barely skim the horizon but never drops below it. So, for New Yorkers the Big Dipper is circumpolar.

At this particular time of the year, the Dipper and its associated constellation of the Great Bear is at its nadir — that is, its lowest point in the sky during the late-evening hours (9 to 11 p.m.). In contrast, Cassiopeia soars some three-quarters up from the northern horizon to the point directly overhead (the zenith).

So, in our current early autumn sky, the Whirling Queen rides high, while the Dipper dips down low.

Let’s check both out, starting with the “Big W” in the sky.

The striking W-shaped figure of Cassiopeia is on the other side of Polaris from the Big Dipper. All through the night and every night throughout the year she looks down upon us whenever the sky is clear. In Greek mythology, she was Queen of the ancient kingdom of Ethiopia — wife of King Cepheus and mother of the Princess Andromeda.

In Roman legend, Cassiopeia was chained to her throne, as a punishment for her boastfulness and placed in the heavens to sometimes hang upside-down. Arab cultures pictured the zig-zag row of five bright twinklers as representing a kneeling camel. Along with resembling a “W”, these stars can also be looked upon as forming an irregular letter “M”, depending on which way the figure is turned in its circling around the pole. An additional fainter star can be added to the five main stars, so that the six together outlines Cassiopeia’s Chair.

At this time of the year as darkness falls, Cassiopeia is ascending the north-northeast sky; she actually seems to resemble a sort of contorted number 3. At around 11 p.m. local daylight time, you’ll find her soaring high above Polaris and most resembling an “M.”

Cassiopeia lies almost completely within the Milky Way, embedded within some marvelous fields of stars. Unlike the region around Sagittarius (which marks the center of our galaxy), we are looking out toward the outer edges of our galaxy when we face Cassiopeia. If you own a pair of binoculars, scan this region and you’ll come across a number of eye-catching sights.

One object that will immediately catch your attention actually belongs not to Cassiopeia, but to an adjacent pattern of stars that represents her future son-in-law, Perseus. If you extend an imaginary line roughly 1.5 times the distance from the star Gamma to Delta Cass (also known as Ruchbah) and beyond, you’ll come across a faint blur of light which binoculars will readily reveal as two concentrations of stars, called h Persei and Chi Persei: the Double Star Cluster of Perseus.

The ancient astronomers Hipparchus and Ptolemy described them as a “cloudy spot.” Galileo with his crude telescope first noticed they were really two clusters of stars. Astronomers estimate that their apparent brightness is dimmed thanks to interstellar dust. When we take this into account, it turns out that the ten brightest stars of this Double Cluster are actually comparable to such brilliant luminaries as Betelgeuse and Rigel in Orion, for each cluster contains very massive blue stars and some of the brightest red stars known. The blue stars are extremely hot, on the order of 100,000 degrees F. (55,500 degrees C.), blazing out energy so fast that they cannot keep it up for more than 10 million years, changing to red as they age. Estimates place these star clusters at distances of about 7,100 to 7,400 light years. Together, their apparent size in the sky exceeds that of the full Moon, and in binoculars or a small telescope form one of the most impressive and spectacular objects in the entire sky.

There are other clusters of stars to be found within Cassiopeia; a fascinating wealth of celestial treasures which indeed seem especially fitting for a Queen!

“Holed up” near the horizon

It makes sense that in our mid-October early evening night sky, that the celestial big bear is following his earthly cousins and also going into hibernation and seemingly is tucked away down along the northern horizon. What is remarkable is that these stars comprised a bear to widely separated early peoples — not only to Old World ancients but New World Native American tribes as well. There must be a reason why mankind has associated bears — particularly polar bears — with this star pattern. This in spite of the fact that the stars that comprise the handle of the Big Dipper also supposedly mark the tail of the bear; but here on Earth bear tails are short and stubby, however Ursa Major’s tail is impossibly long. When Europeans landed in North America, they discovered to their amazement that some of the Indian tribes also made reference to these stars as a bear.

Nothing helps you view the stars in constellations like Cassiopeia and Ursa Major like a good telescope. We recommend the Celestron Astro Fi 102 (opens in new tab) as the top pick in our best beginner’s telescope guide.

The bear’s nose is third-magnitude Muscida, a corruption of the Latin musus, meaning muzzle. The bear’s paws, known to early Arabs as the “Leaps of the Gazelle” are marked by an almost equally spaced set of three pairs of stars. In all likelihood, the Arabs had never actually seen a bear, but they knew gazelles — small, swift and beautiful antelopes of the desert. So they imagined a gazelle bounding through this part of the sky, leaving three pairs of hoof prints in its wake.

This week, as darkness falls, we can view Ursa Major, low in the northwest sky. Its lower extremities are out of view, lying below the horizon. With each passing hour, the Bear will crouch a little lower and by 11 p.m., it will be almost completely out of sight save for the Big Dipper. For localities north of 35-degrees latitude, the Dipper will appear sitting, right side up, just above the northern horizon.

A picture of the Big Dipper taken in August 2007 from the Kalalau Valley lookout at Koke’e State Park in Hawaii. (Image credit: Gh5046/Wikimedia Commons)An “out of balance” dipper

If you have carefully watched the sky, you almost certainly have noticed that when the sun and moon appear near to the horizon, they appear to be abnormally large in size; when higher up they appear noticeably smaller. This is known as the “moon illusion” and indeed, this effect also causes the constellations to appear much larger when hovering near the horizon. If you have a clear and unobstructed view of the northern horizon, the view of the Big Dipper just before midnight will be quite dramatic; it will appear abnormally large and will seemingly fill the lowest part of the northern sky.

Of course, as the hours pass, you’ll notice that not only does the Dipper appear to shrink as it climbs up the sky, but the proportional size of the handle versus the bowl will also appear to change: When the handle is still close to the horizon as it begins its northeastward ascent — around 1 a.m. or 2 a.m. — it will look disproportionately large when compared to the bowl. Yet, it is only our eyes that are fooled. If you were to take a picture of the Big Dipper oriented in that position, it will appear quite normal. In fact, no matter what position it’s photographed, the Dipper’s size and shape will appear exactly the same.

Finally, the Navajo Indians called Ursa Major “The Whirling Male,” and Cassiopeia “The Whirling Female.” To this, British astronomer, artist and poet, Guy Ottewell asks, “Coincidence? — or could the constellation of the Whirling Queen date back to a time when mankind lived closer together?”

We may never know.

« Finder’s Experts Expect XRP to Spike to $3.81 by 2025 if Ripple Wins SEC Lawsuit » She-Hulk tried to save itself from Marvel’s finale formula by jumping the shark