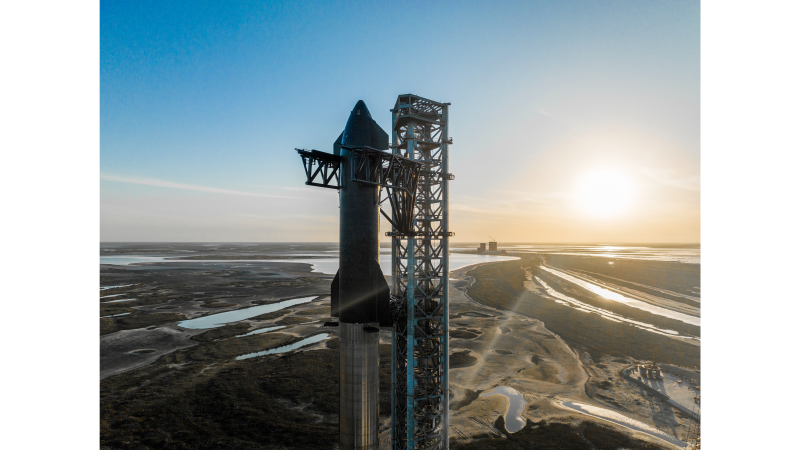 SpaceX is gearing up for the first orbital test flight of its huge Starship Mars rocket, as new photos show.

“Starship full stack propellant load testing at Starbase,” the company wrote on Twitter on Friday (March 18), referring to its South Texas facility near the Gulf Coast village of Boca Chica. The post included images of a fully stacked Starship prototype, the tallest launch vehicle ever built.

The review has been delayed several times and is now expected to come out no earlier than March 28, due to increased consultations and the large number of public comments, the FAA has said.

Related: SpaceX’s Starship will reach orbit this year on road to Mars

Starship consists of a giant first-stage booster called Super Heavy and an upper-stage spacecraft known as Starship. SpaceX is developing the system to take people and cargo to Mars, the moon and other distant destinations.

This isn’t the first time this Starship pair — Booster 4 and Ship 20 — have been stacked. SpaceX has assembled the duo several other times, including earlier this year, to perform fit checks and other procedures.

While Starship is still in the testing phase, it has attracted industry attention. The system has been tapped to help land astronauts on the moon as part of NASA’s Artemis program.

Development of Starship as NASA’s initial crewed lunar lander was delayed by seven months, however, in part due to a now-overturned legal protest by Blue Origin, Jeff Bezos’ spaceflight company. NASA’s inspector general now warns that a NASA crewed moon landing is likely now possible in 2026 at the earliest, a year later than the timeline the agency has been targeting.

Starship has also been tapped as one of the vehicles of the Polaris Program, which is a privately funded series of space missions organized by billionaire Jared Isaacman. Isaacman, the founder of payment provider Shift4, is best known for commanding the Inspiration4 mission to Earth orbit with an all-civilian crew in 2021.

An independently funded billionaire mission from Yusaku Maezawa, called dearMoon, is scheduled to use a Starship to fly nine people around the moon. Maezawa said as late as last year that he hopes to do that flight in 2023. There’s no official word yet on whether the FAA’s lengthened review has affected the target launch date.