Space photos: The most amazing images this week! 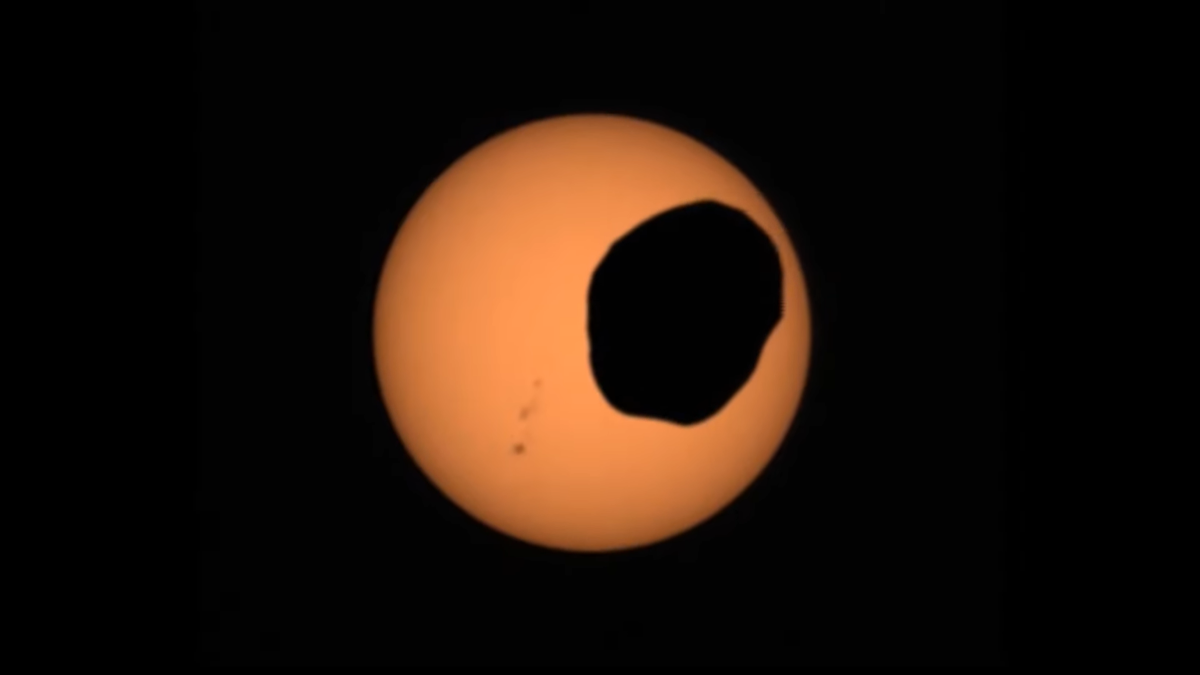 A Martian solar eclipse, swarms of sizeable sunspots, and a pink moon rising behind a moon rocket. These are some of the top images this week from Space.com.

The sky gets a little darker at MarsA screenshot from a video showing the Mars moon Phobos crossing the face of the sun. NASA’s Perseverance Mars rover captured the video on April 2, 2022, with its Mastcam-Z camera. You can also spot a group of sunspots on the left. (Image credit: NASA/JPL-Caltech/ASU/MSSS/SSI)

In between hunting for ancient signs of life on Mars, the Perseverance rover did a side quest for science: looking at the moon Phobos passing across the face of the sun. Looking at the doomed moon during situations like this allows researchers to better understand the orbit of Phobos around Mars, as well as the Red Planet’s structure.

The two massive sunspot groups, known as AR 2993 and AR 2994, became visible a few days ago at the northeast limb of the sun after becoming active while still hidden by the sun’s disk. (Image credit: Langkawi National Observatory, MYSA/MOSTI)

The sun, which has been roaring out storms for several weeks now, has two immense swarms of sunspots hinting at more potential action for Earth. These monstrously large features are called “active regions” 2993 and 2994 (AR2993 and AR2994). If they eject charged particles directly towards Earth, we might be in for more aurora.

Full story: New swarms of sunspots are so gigantic they could devour Earth whole

While Artemis 1 is back inside a launch facility to fix some technical issues, just before that happened we had a more rosy view of its destination. Photographer Michael Seeley captured the image of a pink moon, along with of NASA’s Space Launch System (SLS) rocket, on Saturday (April 16) from a boat off the coast of Florida in the Atlantic Ocean

Full story: Stunning pink moon sets behind Artemis 1 just before it rolls off the pad

A dusty Mars lander is just visible from orbit

The Ingenuity helicopter, circled in red, seen from space on Mars on March, 31 2022. (Image credit: NASA/JPL-Caltech/UArizona)

The dust buildup on the NASA Jet Propulsion Laboratory’s InSight Mars lander is severe enough to see from orbit. The agency’s Mars Reconnaissance Orbiter. captured the buildup of regolith over more than three years in a high-definition image acquired April 9. InSight is likely nearing the end of its mission due to dust choking off its solar power supply.

Yes, a hologram doctor did visit the space station

In a real-life moment that feels like a typical “Star Trek” episode, a team of hologram doctors was “holoported” to space to visit astronauts living aboard the International Space Station, NASA has revealed. The hologram teams, led by NASA flight surgeon Dr. Josef Schmid and Fernando De La Peña Llaca, CEO of software provider Aexa Aerospace, were the first humans to ever be “holoported” from Earth to space.

The nearly 32-year-old Hubble Space Telescope caught five galaxies in action as they gradually merge into a single entity. The collection, known as Hickson Compact Group (HCG) 40, should become one object in roughly a billion years from now, Hubble officials said in a statement. This image is just a sampling of the telescope’s decades-long work in galactic evolution.

Speaking of Hubble and galaxies, a beautiful new image from the observatory shows a pair of “fluttering wings” made due to an ongoing collision between two distant galaxies. The galactic wings are part of the VV689 system, nicknamed the Angel Wing. The image emerged via a citizen science project called the Galaxy Zoo.

A photographer witnessed a powerful auroral punch, generated by the sun, resonate for more than four hours in a remote Alaskan location. “It was more active than normal, although I did see similar last winter,” photographer Lee Kirkum wrote in an e-mail. “They usually aren’t this showy. I usually see all streaks, but this time — at one point — it had the whole sky, except the extreme southern sky.”

A “night spiral” or “flying whirlpool” was generated within view of the Subaru Telescope on Sunday (April 17). But the high-sky phenomenon had a rather Earthly explanation. The spiral was actually a dying SpaceX Falcon 9 rocket stage that created the stunning show over Hawaii.

The sun unleashed a major X1.1 class solar flare from an active sunspot cluster on its eastern limb on April 17, 2022 GMT. This view was taken by NASA’s Solar Dynamics Observatory. (Image credit: NASA/SDO and the AIA, EVE, and HMI science teams)

The sun kicked off the week with a literal blast, unleashing a major solar flare during the Easter holiday weekend, that created radio blackouts. Dozens more flares after this event, all the way up to the most powerful X-class, occurred as the sun enters a more active stage of its 11-year-cycle.

Join our Space Forums to keep talking space on the latest missions, night sky and more! And if you have a news tip, correction or comment, let us know at: [email protected]