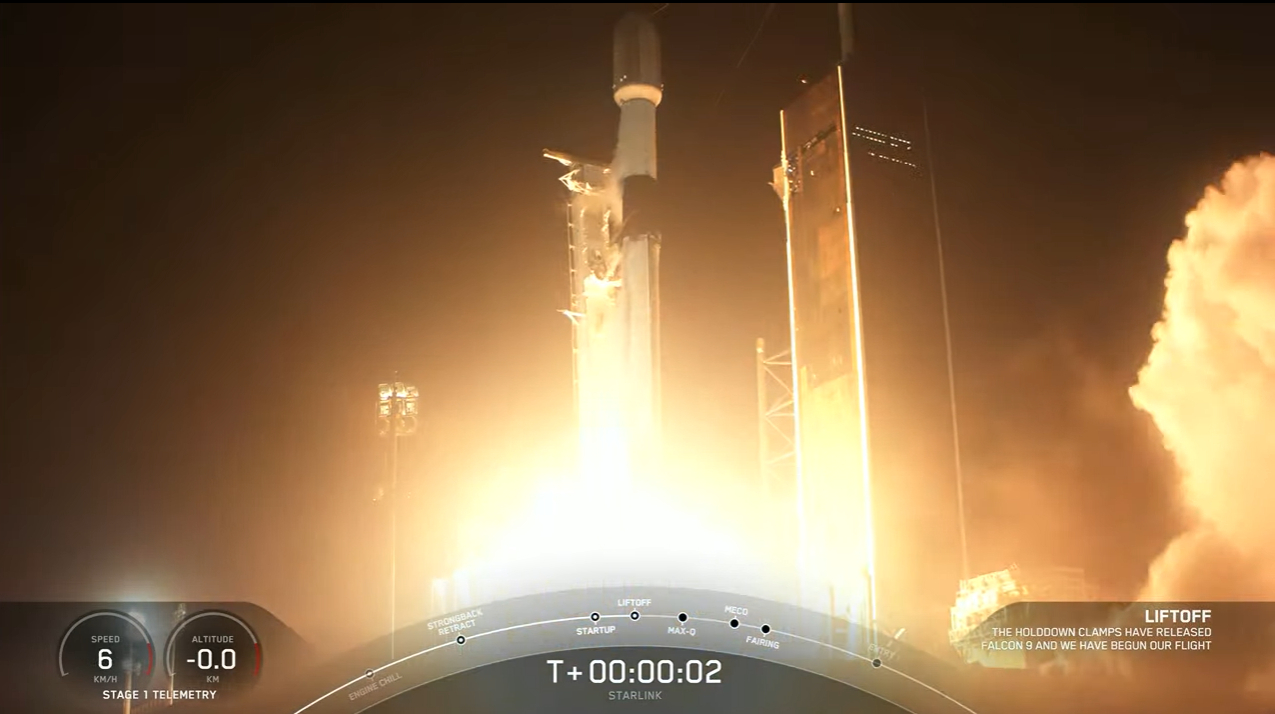 SpaceX launched a novel — and colossal — commercial communications satellite into orbit late Saturday and set a new launch record for its Falcon 9 rocket at the same time.

The Falcon 9 launched into orbit from Pad 39A at NASA’s Kennedy Space Center in Florida carrying 34 of SpaceX’s Starlink internet satellites and BlueWalker 3, a prototype satellite built by AST SpaceMobile that’s billed as the largest commercial communications array ever flown in space. Liftoff was at 9:20 p.m. EDT (0120 GMT) on Saturday night (Sept. 10), with the Falcon 9 booster making some SpaceX history when it returned to Earth.

“This is a record-breaking 14th landing for this booster,” Jesse Anderson, a SpaceX production engineering manager, said during live commentary (opens in new tab).

The mission also set a few other records.

It was SpaceX’s first five-engine-burn mission to deploy payloads in orbit, as well as the company’s heaviest rideshare payload ever. (BlueWalker 3 weighs a whopping 3,300 pounds (1,500 kilograms), Anderson said.)

“One of our most complex missions,” SpaceX CEO Elon Musk wrote of the flight on Twitter (opens in new tab).

While SpaceX’s primary goal for Saturday’s launch was to add 34 new Starlink satellites to its growing constellation in orbit, AST SpaceMobile’s BlueWalker 3 satellite stood out for both its size and ambitious mission.

The satellite, which will measure 693 square feet (64 square meters) when fully unfolded, is the largest commercial antenna array launched into space. Its mission: to test new technology designed to provide global cellular phone service directly to users from space. The goal is to fill in coverage gaps and provide seamless high-speed phone and data service in underserved areas.

“The reason why our satellite is large is because in order to communicate with a low-power, low internal strength phone, you just need a large antenna on one side with a lot of power, and so that’s a critical part of our infrastructure,” AST SpaceMobile Chief Strategy Officer Scott Wisniewski told Space.com in an interview. “We think that’s really important for communicating directly with regulars handsets, with no change to the handset, with no extra burdens on the user.”

It will be several weeks before AST SpaceMobile commands BlueWalker 3 to deploy its spring-loaded antenna, Wisniewski said. During that time, the company will perform a series of health checks to ensure the satellite is okay, he added.

AST SpaceMobile has partnered with 25 cellular service providers, 10 of which will participate in the company’s planned six-month shakedown cruise of BlueWalker 3 to test its capabilities across six continents around the world. Those partners include providers like Vodaphone, Rakuten Mobile and Orange, and a potential reach of 1.8  million phone users, Wisniewski said. Earlier this summer, the company received an FCC license to test BlueWalker 3’s service in Texas and Hawaii in the United States.

In order to provide complete coverage, AST SpaceMobile will need more than one satellite. “This is the culmination of kind of the R&D stage of our company before we go on to production satellites next year,” Wisniewski said.

The BlueWalker 3 satellite is seen deployed on Earth. It is the largest commercial communications array sent to space. (Image credit: SpaceX)

The company plans to follow BlueWalker 3 with five operational satellites in 2023. It ultimately aims to build a constellation of at least 100 giant satellites to provide complete coverage.

AST SpaceMobile isn’t alone in its pursuit of cell phone coverage from space. The company Lynk Global is working on a similar project and Elon Musk unveiled last month that SpaceX is teaming up with T-Mobile to provide cellular service with its Starlink satellites.

Because of their size, AST SpaceMobile’s satellites may be visible to skywatchers from the ground and some astronomers have criticized the plan for its potential impact on telescope observations from the ground, according to a New Scientist report (opens in new tab). If that complaint sounds familiar, that’s because it’s one that’s dogged SpaceX’s own Starlink constellation once that company began launching dozens of them at a time.

SpaceX’s most-flown Falcon 9 rocket yet is seen atop the drone ship a Shortfall Of Gravitas in the Atlantic Ocean after its 14th launch and landing on Sept. 10, 2022. (Image credit: SpaceX)

About 8.5 minutes after launching the BlueWalker 3 and Starlink satellites, the first stage of SpaceX’s Falcon 9 rocket returned to Earth for a pinpoint landing on the company’s droneship A Shortfall Of Gravitas in the Atlantic Ocean. The landing set a new record for the number of launches for a Falcon 9 booster.

Before Saturday’s flight, the Falcon 9 stage launched eight different Starlink missions, as well as SpaceX’s first astronaut test flight for NASA (called Demo-2) in May 2020; the ANASIS-2 satellite for South Korea in July 2020; the uncrewed CRS-21 cargo mission to the International Space Station for NASA in December 2020, as well as the Transporter 1 and Transporter 3 rideshare missions in January 2021 and January 2022, respectively.

When Elon Musk unveiled the workhorse Falcon 9 Block 5 booster in 2018, he said SpaceX’s goal was to fly them at least 10 times. With each subsequent flight, the company has pushed its boundaries for rocket reusability as part of its effort to lower the cost of spaceflight.

A view of the 34 Starlink satellites aboard SpaceX’s Falcon 9 rocket during its Sept. 10, 2022 launch. (Image credit: SpaceX)

Similarly, SpaceX has continued to grow the size of its Starlink constellation, as well as the number of countries and areas of coverage in recent years. In August, Royal Caribbean announced (opens in new tab) it will be using Starlink aboard all of its cruise ships by 2023, with SpaceX already offering services for RVs, boats and homes around the world.

The company has launched more than 3,200 satellites since 2019, with thousands more to come. SpaceX plans to complete its initial constellation with 12,000 Starlinks in orbit and has applied for permission to boost that up to 30,000 satellites.

On Sunday, Sept. 11, SpaceX plans to launch yet another Starlink mission. That flight, which will carry 54 Starlink satellites, is scheduled to launch from Space Launch Complex 40 at the Cape Canaveral Space Force Station in Florida at 10:53 p.m. EDT (0253 GMT). You’ll be able to watch that launch live on Space.com at liftoff time.

Saturday’s launch marked the 41st of the year for SpaceX. It was the company’s 179th launch overall.