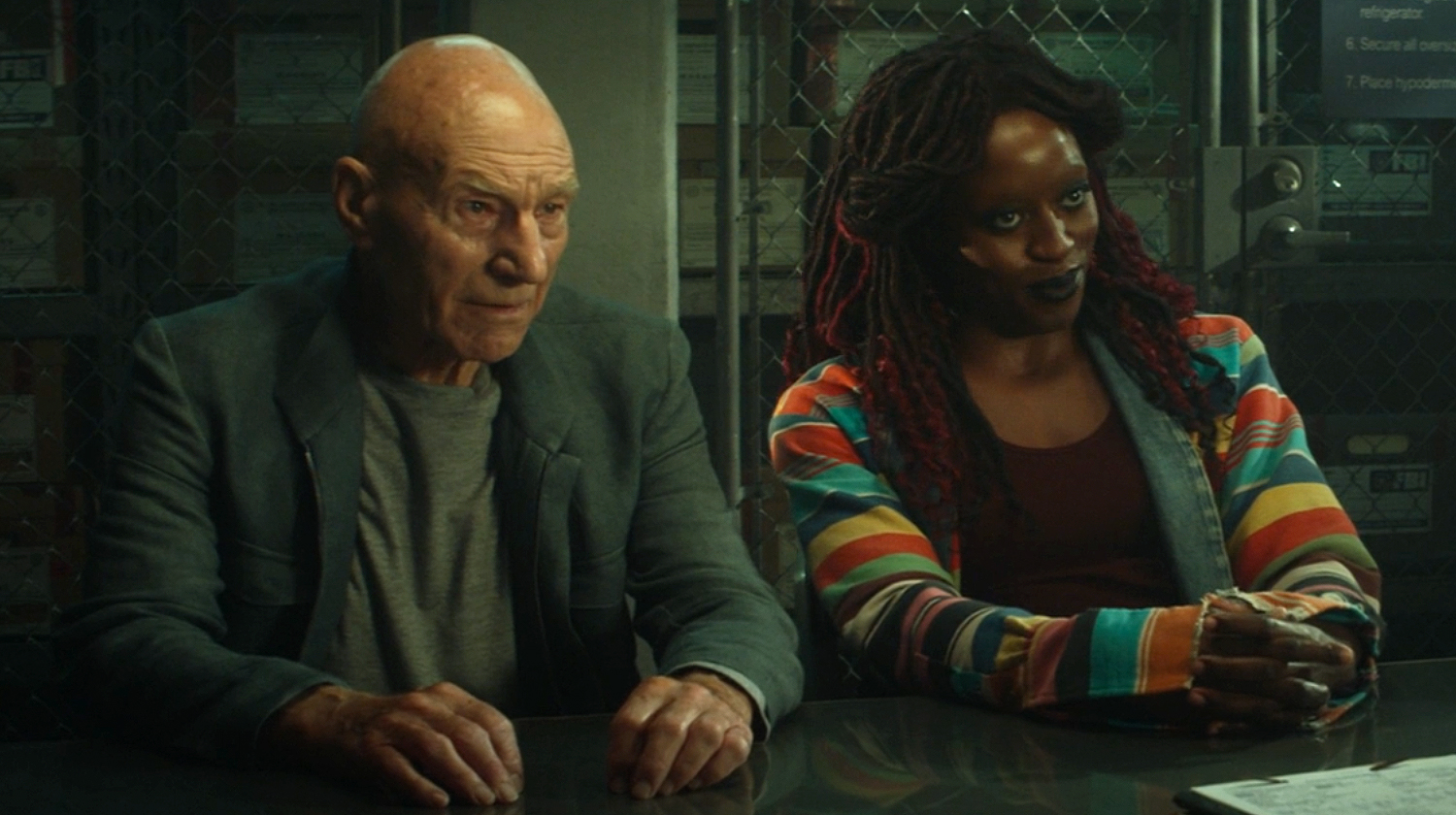 We’ve mentioned before that with the exception of the first season of “Star Trek: Discovery” much of “Nu Trek” that we’ve seen since then has been a mix of both good and bad episodes, resulting just about every time in a somewhat inconsistent season as a whole. And this second season of “Star Trek: Picard” on Paramount Plus has been the same, despite one of the strongest starts of any of the “Nu Trek” shows. However, with just two more installments remaining, episode 8, entitled “Mercy” shows a return to the form started in the excellent Season 2 premiere episode “The Star Gazer.”

Interestingly, so far for this season, each “guest” director has taken on two consecutive episodes: Douglas Aarniokoski E01, E02, Lea Thompson E03, E04, Jonathan Frakes E05, E06 and finally, Joe Menendez E07 and E08. Some of these have obvious of signs of the same style, while others do not. Please feel free to draw your own conclusions regarding that. And who will helm E09 and E10 remains to be seen. If you’ve missed a few episodes (or all of them) and want to get caught up before reading this review, check out our guide on how to stream Star Trek: Picard.

One of the most surprising elements of this second season of “Picard” is how many times the vastly underrated “Star Trek” show “Enterprise” has been referenced. (This is my favorite incarnation of “Star Trek,” so personally, I’m delighted.)

“Carbon Creek” is a warm, fuzzy kind of episode that you want to watch while it’s pouring with rain outside (Image credit: Paramount Plus)

The OV-165 shuttle from the opening credits to “Enterprise” was seen just a couple of weeks ago in the episode “Two of One” (S02, E06), Q even referenced the epic “Enterprise” two-part episode “In a Mirror, Darkly” (S04, E18 & E19) by name in the second episode of “Picard” entitled “Penance.” (The title itself is more than likely an appropriation of 1 Corinthians 13:12, which reads, in part: “For now we see through a glass darkly; but then, face to face: now I know in part; but then I shall know even as I am known.”) Finally, Brent Spiner’s Dr. Adam Soong is the direct ancestor to Dr. Arik Soong, who appeared in “the augments” three-episode story arc and of course there had been some speculation has to whether or not we would see some evidence of the Vulcan’s first visit to earth in 1957, not in 2063.

In the vastly under-appreciated “Enterprise” episode “Carbon Creek” (S02, E02) Capt. Archer, Cmdr. Tucker and Sub-Cmdr. T’Pol are enjoying dinner in the Captain’s quarters and Archer inquires why T’Pol traveled to a small Pennsylvania mining town called Carbon Creek during her recent visit to Earth. T’Pol begins to tell the tale of the her grandmother T’Mir who, in the Earth year 1957 — along with her fellow Vulcan crewmembers Mestral, Stron and their captain — are conducting basic research on Earth and humans from the safety of high orbit.

Unfortunately however, there is a problem with the impulse manifold and their ship crashes in rural Pennsylvania. Their captain dies in the accident and T’Mir assumes command. No one is sure if their distress signal was successfully sent, let alone actually received and after two weeks surviving on their rations and hiding in the woodland, the three Vulcans reluctantly agree that they must make contact with the inhabitants of the nearest town, Carbon Creek. With no sign of rescue, T’Mir, Mestral and Stron slowly, discretely integrate into the community, each in their own way.

The Vulcan version of a tricorder is just one little reference to previous secret survey missions to Earth (Image credit: Paramount Plus)

And as we learn later in this episode of “Picard” — and in a really interesting twist — the FBI Agent Wells (Jay Karnes) who arrested Jean-Luc (Patrick Stewart) and Guinan (Ito Aghayere) at the end of last week’s episode, stumbled across two Vulcans in a forest, at night, while looking for his dog, when he was a child. Thus giving him nightmares for a very long time afterwards. And in an extremely unusual — but very welcome — decision, the showrunner has chosen not to spoon-feed the audience by having some poor member of the cast cheapen themselves and explain Carbon Creek in exposition. <Chef’s Kiss>

The Vulcan survey team that Agent Wells accidentally stumbles across are obviously not the same crew — T’Mir and Stron were eventually rescued while Mestral elected to remain on Earth — plus the events of “Carbon Creek” were approximately 15 years prior to his childhood encounter. So our imaginations have room to wander. But we are clearly meant to understand that the Vulcans continued to send survey and research missions to Earth before the official first contact in Bozeman, Montana some 90 years later.

All of this represents the Picard/Guinan sub-plot in this episode and from start to finish, it’s well written, enthralling and well executed, as are almost all of the four or five different sub-plots. It’s that last 30 seconds that really lets it down. The dialogue is believable and doesn’t push the boundaries of convenience or canon…until the very end. There’s even a thrilling confrontation between young Guinan and Q (John de Lancie) where we learn much more about the irksome entity’s condition and reasons (bizarre and inexplicable though they may be) as to why he’s behaving like he is.

Argh! Imagine putting on an AR headset expecting to play Wii golf and finding this guy there instead (Image credit: Paramount Plus)

Meanwhile Seven of Nine (Jeri Ryan) and Raffi (Michelle Hurd) are trying to track down Dr. Agnes Jurati (Alison Pill) who has more or less been possessed by the Borg Queen. And until any actual scene that Jurati shows up in, this too is an entertaining story, complete with not-awful flashback sequences about Elnor (Evan Evagora). Sadly though, it’s through this sub-plot that we learn of Jurati’s plan and you know, right up until it actually happens, it doesn’t sound dreadful. Then we actually see it. And it is. Dreadful.

On board la Sirena, Cristóbal Rios (Santiago Cabrera) is busy charming the socks off Dr. Ramirez (Sol Rodriguez) and even wins over her son, Ricardo (Steve Gutierrez) with cake from the ship’s replicator. Not a huge amount actually happens here, but the dialogue is very well written and we’re utterly captivated as the relationship between the good Doctor Ramirez and the bearded, burly beefcake that is Rios continues to grow.

And there’s Soong himself and his “daughter” Kore (Isa Briones). After having discovered more about herself and previous experiments last week, Q approaches Kore and offers her a cure; essentially the key to her cell, the freedom to be able to walk away from Soong, which she does leaving the controversial quack looking for alternative methods to “continue his work.” Cue Queen Agnes.

These two should so have their own TV detective spin-off show, like Cagney & Lacey, only in Los Angeles (Image credit: Paramount Plus)

Even the idea of using Soong’s previous experimental soldiers that were only very subtly mentioned in episode 5 “Fly Me to the Moon” is interesting and unexpected…and then Jurati goes and semi-assimilates them. And such an otherwise outstanding episode is shot down in flames in the last 30 seconds.

For a moment at least, we were able to forget how we got here and just enjoy actually being here. However, to paraphrase from another sci-fi franchise, I have a bad feeling about next week.