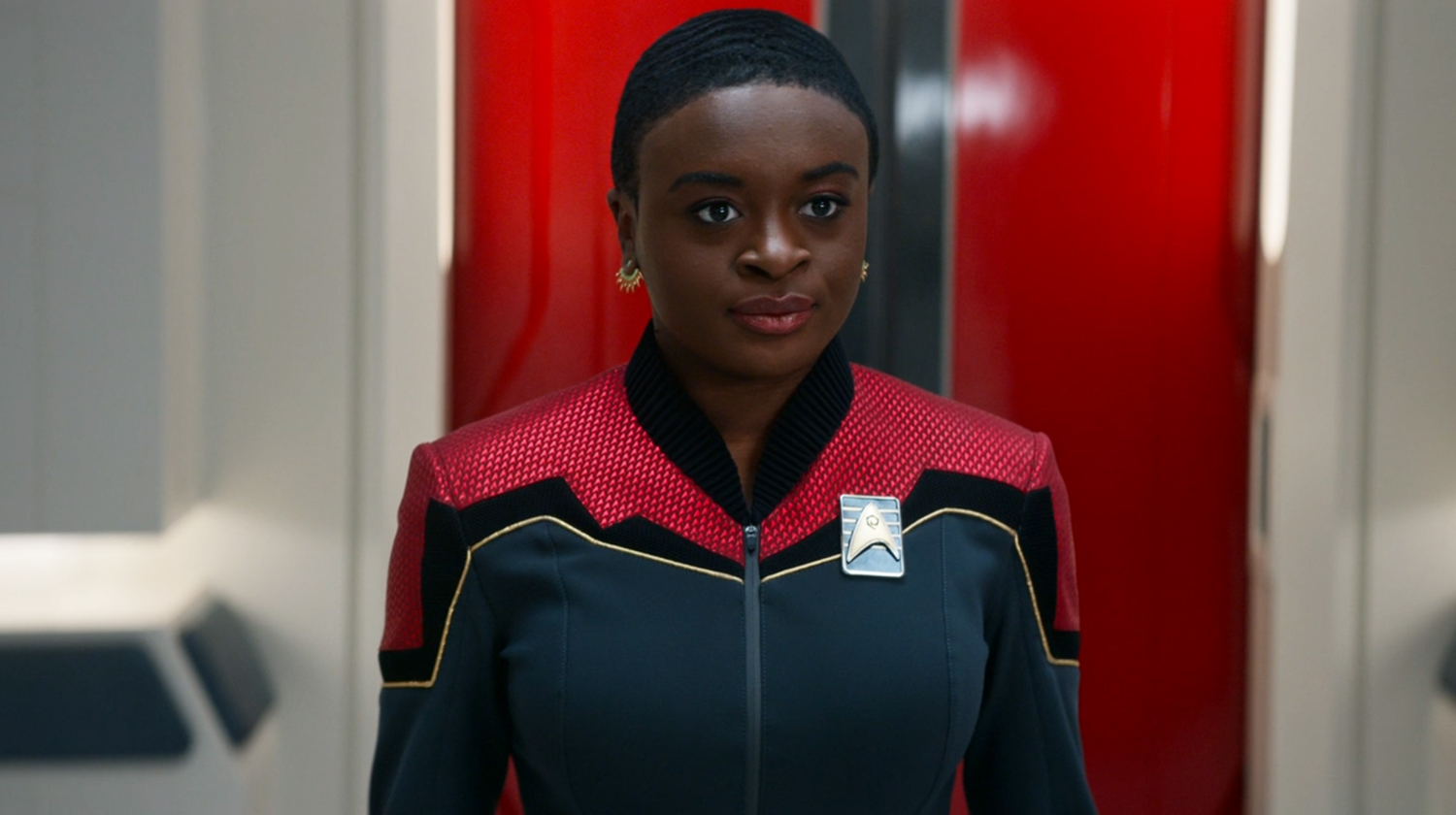 After just two episodes, the response to “Star Trek: Strange New Worlds” has been overwhelmingly positive and it is now — already — the top-rated “Trek” series on Rotten Tomatoes. We still think it has a way to go before it beats “Enterprise,” but some worthwhile competition is a healthy thing.

Interestingly, one of the many themes explored in this episode, entitled “Children of the Comet,” is that the evolution of organic life, in this case on the planet Persephone III, was at least assisted by the release of elements from a comet impact. And only weeks ago, scientists discovered that key building blocks of human DNA, that previous research failed to find in meteorites, have now been discovered in space rocks, suggesting that cosmic impacts once helped deliver these vital ingredients of life to ancient Earth.

The flashback recap at the beginning of this episode confirms that there will be character-based story arcs, but we knew that already. And almost straightaway we’re focused on young Cadet Nyota Uhura (Celia Rose Gooding) as she prepares for her first dinner in the captain’s quarters … and oh my goodness, what quarters they are.

Uhura gets punked by Lt Erica Ortegas (Melissa Navia) and told she has to wear her Starfleet dress uniform, when in fact everyone is casually dressed. It’s a bit like when astronaut Tracy Stevens arrives at Jamestown Base in S02, E05 of “For All Mankind” and she has to wear the “Linus” patch until the fresh-faced recruit becomes the newest member of the lunar outpost team. And Pike’s reaction to this is priceless.

“I’m considering going long on April wheat. What do you think, Valentine..?” (Image credit: Paramount Plus)

During the dinner in Pike’s luxurious quarters, we get a full introduction to another reoccurring character, Hemmer (Bruce Horak) a blind Aenar who compensates by having other, much more attuned senses, including a very basic form of telepathy — more like a sixth sense. It seems a little peculiar to have gone with another visually impaired Chief Engineer, but hopefully we’ll stay clear of any potential clichés.

The whole scene is basically a set up for Pike to quiz the young communications cadet on her future plans and she reveals a story about her past and says she’s unsure if Starfleet is really for her. [Spoiler: it is.]

Related: ‘Strange New Worlds’ episode 1 is a love letter to ‘The Original Series’

Uhura’s story is another opportunity for the writers to insert more background into the lives of characters that we already know and love. It’s well written and delivered flawlessly as this show continues to follow a more old school-style, single-serving format, which itself continues to be extremely enjoyable. (Paramount has also released some wonderful images from the filming of this scene on Twitter.)

Then we get that incredible opening sequence again. It’s a delight to watch and listen to as the audio and visual elements combine to create an almost two-minute long tribute to “The Original Series” and by far the best opening to any series of “Star Trek.”

No. Just No. We love the attention to detail in this show and it really benefits from not incorporating this (Image credit: Paramount Plus)

Turns out that the comet, which is making its way through the Persephone system, will in fact collide and crash into Persephone III, an inhabited world — and while there aren’t exactly billions of people down there, the planet’s population is still at risk. So, a plan is hatched to fire off a couple of photon torpedoes and destroy the comet before impact. However, it unexpectedly activates a defensive shield and since this is not the typical behavior of a comet, a team is dispatched to investigate.

At this point, we at Space.com would like to say a huge, heartfelt thank you to everyone behind “Star Trek: Strange New Worlds” for not using the “Transformer”-effect with the USS Enterprise environment suit helmets. We saw this quick-fix effect applied in the Season 2 premiere episode of “Discovery” entitled “Brother” and since that took place less than two years ago in “Trek” Time, it was entirely possible it would be used again, now. It’s a lazy, unrealistic answer to “what shall we do with our helmets in this scene” that always feels out of place. Here, the issue is handled perfectly, even when Sam Kirk (Dan Jeannotte) is injured and must have his helmet removed; it’s subtle, understated and you probably won’t have even noticed, but little things like this are oh-so-important to creating a truly immersive experience. ThankYouThankYouThankYou.

Which brings us onto George Samuel “Sam” Kirk. We mentioned him briefly last week, but yes, James Kirk’s older brother is currently a member of the bridge crew of the USS Enterprise, but because his backstory at this point was more or less a blank canvas, it’s perfectly possible.

He was supposed to be in J.J. Abrams’ 2009 Star Trek movie (played by Spencer Daniels) when a young, reckless and carefree James Kirk drives his stepfather’s car off a cliff for no other apparent reason other than to inform the audience that James Kirk is young, reckless and carefree. Although, interestingly, when all of Daniels’ other scenes were removed, the character of Sam was essentially eliminated, and the audio was overdubbed when he saw “George” on his joyride as he sped past, referring to him instead as “Johnny,” a supposed childhood chum.

One of these two is Roc Ingersol, security chief on the NSEA-Protector, the other is Lt. George Samuel Kirk. (Image credit: Paramount Plus/Dreamworks)

However, we’ve seen his unfortunate demise in “The Original Series” when, in eight years from now, he’s killed by a flying parasitic alien on the planet Deneva, in the episode “Operation — Annihilate!” (S01, E29) along with his wife, Aurelan Kirk. However, his son Peter survives, along with two other children whose names vary in “Star Trek” canon, depending on which novel you’re reading. But, what that means is we may potentially have some time to explore this little-known sibling of the legendary James T. Kirk.

That said … the legendary James T. Kirk is himself set to appear in “Strange New Worlds” — in Season 2 — as announced by Paramount. Paul Wesley, star of “The Vampire Diaries” will play the role, but there are currently no details on if Wesley will be a series regular, or have a guest or recurring role in season two.

It makes you wonder if we’ll get any of the fun clichés from “The Original Series” including, but not limited to:

• Pike getting his shirt off or at least torn across the torso
• Token, crazy-with-fear crewmen, especially at the helm, in a crisis
• Sacrificial red shirt or two (which we saw in both “TOS” and the 2009 movie)
• We saw that Pike has a long-time partner last week, so presumably he won’t be sleeping with every Terrakian slave girl and Moon Princess on the show

The USS Enterprise is confronted by a giant alien ship crewed by an race that call themselves “shepherds” and refer to the comet as M’hanit, since it’s sacred to them. Despite Pike’s protests, they insist that M’hanit will decide to bring either life or destruction to the planet below, but its decision is final and cannot be interfered with. Meanwhile the away team that are on the surface of the comet find a way to communicate with it and with the exception of Spock singing, the whole thing is handled in a classic “Star Trek” manner; a way is devised to keep everybody happy without anyone getting hurt. Or at least seriously hurt.

Pike’s PTSD continues to plague him and it’s good that it hasn’t just been kept to the first episode, last week. In fact, this whole episode comes back to entertain the notion that perhaps he can change his future, a potential plot that could be interesting to watch unfold. However, Nyota Uhura is the real star of this week’s episode and as she’s the one who manages to unlock the secrets of M’hanit. Hopefully all of the main characters will be given whole episodes to further explore their past over the course of the next couple of seasons.

Anson Mount meanwhile has absolutely nailed the part of Pike and while most of us already knew this was the case after the “Star Trek: Discovery” episode “Eden” (S02, E02), that he’s been given this chance and we’ve been given this show, marks the best decision so far from then-CBS-now-Paramount, aside from the painfully slow realization of the potential they had with this IP. Providing the right decisions are made with how to handle the little finicky bits — you know, like environment suit helmets — and the plot remains fresh, this is going to be a runaway hit.

The first episode of “Strange New Worlds” is now available to watch on Paramount Plus as is the entire second season of “Star Trek: Picard.” Season 4 of “Star Trek: Discovery” is also available on the Paramount streaming service in the US and CTV Sci-Fi or Crave TV in Canada. Countries outside of North America can watch on the Pluto TV Sci-Fi channel.

Paramount has confirmed that its streaming platform will launch in the UK and Ireland on June 22, available both as a standalone service and as part of the Sky Cinema subscription for the UK cable provider.