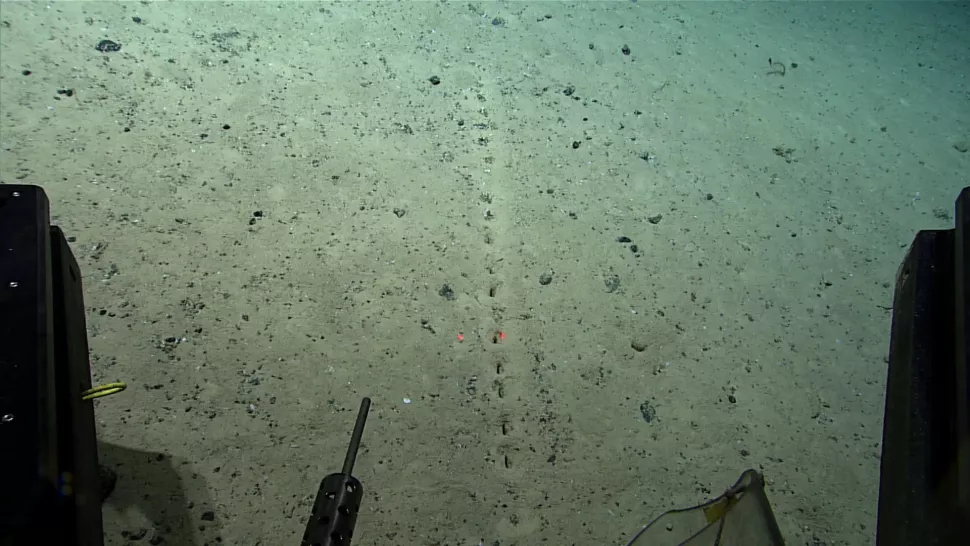 Explorers have discovered a series of mysterious, “perfectly aligned” holes punched into the seafloor roughly 1.6 miles (2.6 kilometers) beneath the ocean surface, and they have no idea who or what made them.

The strange holes were spotted by the crew of the National Oceanic and Atmospheric Administration’s (NOAA) Okeanos Explorer vessel as they investigated the Mid-Atlantic Ridge — a mostly unexplored region of the Earth‘s seafloor that is part of the world’s largest mountain range.

The holes form a straight line and appear at regularly repeating distances, and they are surrounded by tiny mounds of sediment. This isn’t the first time that holes have been spotted in the area; two marine scientists from the U.S. National Marine Fisheries Service also spotted mysterious hollows in the ocean floor during a dive in 2004.

“These holes have been previously reported from the region, but their origin remains a mystery,” the NOAA researchers wrote on Facebook (opens in new tab). “While they look almost human made, the little piles of sediment around the holes make them seem like they were excavated by… something.”

In 2004, scientists proposed that an organism living in or sifting through the seafloor’s sediment made the holes, but because no one has seen such creatures make them, their exact origins are unknown. Public speculation under the NOAA post’s Facebook page ranged widely — from cracks in the floor’s surface made by escaping gas, to underwater human craft digging for treasure, to ants, aliens and even starfish doing cartwheels.

The unresolved mystery is reminiscent of an underwater “yellow brick road” to Atlantis (opens in new tab) that ocean explorers discovered on top of an underwater mountain near Hawaii in May. Scientists explained that discovery — they suspected that heating and cooling of the seafloor across multiple volcanic eruptions created the strange path.

What is creating the holes, on the other hand, may take a little longer to figure out. The researchers will continue to explore the region until September as part of the Voyage to the Ridge 2022 expedition, which aims to map out the region’s coral reefs (opens in new tab) and sponge habitats alongside studying the region’s hydrothermal vents and its fracture and rift zones. Maybe if they’re lucky, they might just catch the hole-maker in the act.