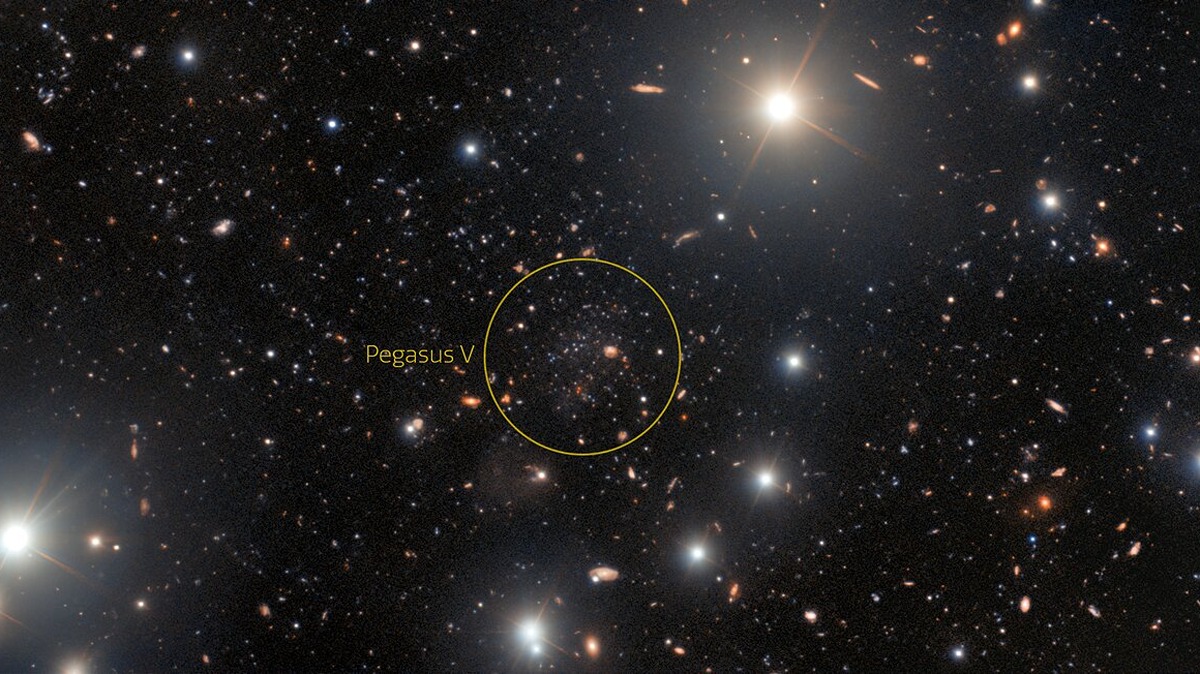 An amateur astronomer found a fossilized surprise in the well-studied sky near the bright Andromeda Galaxy.

Skywatcher Giuseppe Donatiello spotted an ultra-faint dwarf galaxy, now dubbed Pegasus V, in archival data from a U.S. Department of Energy camera designed to hunt for dark energy. Intrigued astronomers who heard about his observations then studied the region using a bigger Hawaiian telescope, called Gemini North. Scientists now think that Pegasus V might be a “fossil” of the first galaxies, packed with very old stars.

“This discovery marks the first time a galaxy this faint has been found around the Andromeda Galaxy using an astronomical survey that wasn’t specifically designed for the task,” Michelle Collins, an astronomer at the University of Surrey in the United Kingdom who led the new research, said in a statement (opens in new tab) from the National Science Foundation’s National Optical-Infrared Astronomy Research Laboratory (NOIRLab), which operates Gemini North.

Related: The history of the universe: Big Bang to now in 10 easy steps

The galaxy was first detected in data gathered by the Víctor M. Blanco 4-meter Telescope at the Cerro Tololo Inter-American Observatory in Chile. Donatiello was taking part in a search for Andromeda dwarf galaxies conducted by David Martinez-Delgado from the Instituto de Astrofísica de Andalucía, Spain, when his sharp eyes spotted Perseus V.

The new find, which contains only very small amounts of heavy elements, must therefore be a particularly old galaxy, the scientists argue.

Finding such an object is key because astronomers expect many faint galaxies to exist but have actually observed very few of them. Scientists aren’t sure why that discovery gap for these faint, fossilized galaxies might exist, although their faint glow certainly makes them hard to spot even by professionals.

But if future searches turn up relatively empty, astronomy may be facing a reckoning. “If there are truly fewer faint galaxies than predicted, this would imply a serious problem with astronomers’ understanding of cosmology and dark matter,” NOIRLab said.

The Andromeda Galaxy, nearby where the newfound faint galaxy was discovered, can be found on the edges of the Andromeda constellation. (Image credit: Alan Dyer /VW PICS/Universal Images Group via Getty Images)

Dark matter is believed to make up much of the underlying structure of the universe, but astronomers’ challenge in seeking it is dark matter is invisible to telescopic investigations. We can only see it through its effects on other objects.

The hope is that the keen eyes of NASA’s James Webb Space Telescope will shed more light on early galaxies when that deep-space observatory completes commissioning in mid-July.

“This little fossil galaxy from the early universe may help us understand how galaxies form, and whether our understanding of dark matter is correct,” Collins said.

A preprint version of the study is available on arXiv.org (opens in new tab). The study will appear shortly in the peer-reviewed Monthly Notices of the Royal Astronomical Society, according to NOIRLab.

« Building on NATO Summit, Chair of Military Committee commends Spain for strong contributions to the Alliance » Astronauts may need to jump in space to fight bone loss