The 8BitDo Ultimate Is Even Better Than The Switch Pro Controller

Third-party controller manufacturer 8BitDo has released no shortage of great controllers for Nintendo Switch and other platforms, but many of them fall into the category of “situational” options–controllers that are ideal for certain games and genres. The 8BitDo Ultimate Bluetooth Switch controller is a different beast. Not only does it have superb ergonomics, pro-style features, and customization galore, but it also comes with a charging stand and can connect via Bluetooth or 2.4GHz.

One of the obvious reasons why the 8BitDo Ultimate is an excellent alternative to the Switch Pro controller is its form factor and button layout. The Ultimate has the same general layout with offset sticks and ergonomic handles. Prior to the Ultimate, 8BitDo’s premium Switch controllers (such as the Pro 2) had aligned joysticks like PlayStation controllers. The Pro 2 was and still is great for many types of games, but its form factor made it excel particularly with retro games. The Ultimate is slightly more compact than Nintendo’s Pro controller, though it still feels natural to use, even as someone who has spent five years with the Pro controller. That said, if you have large hands, it may take some getting used to or feel a bit cramped compared to the Pro controller or even an Xbox controller. 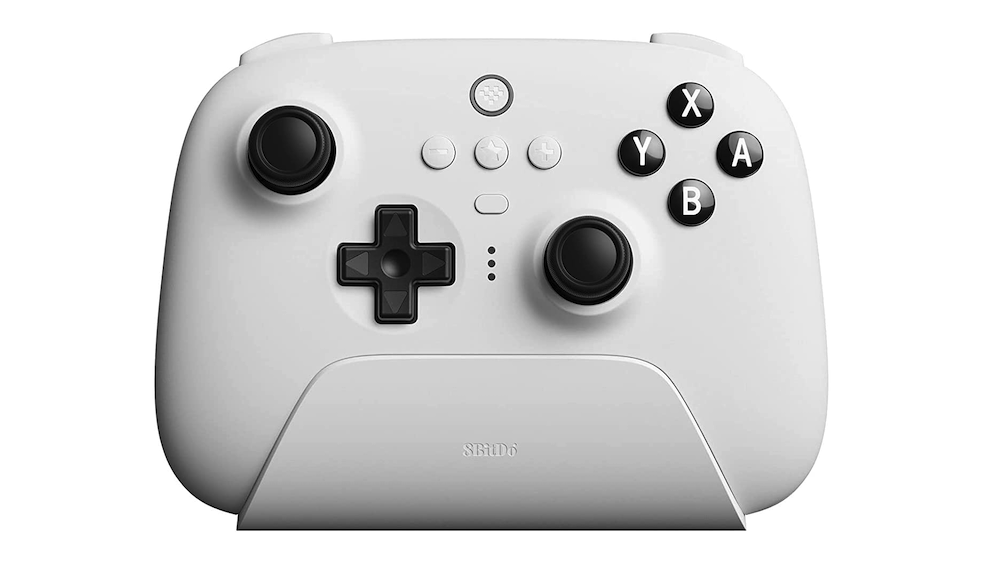 The 8BitDo Ultimate comes with a charging dock.

The face buttons have a dome design that make them feel almost exactly like Xbox controller inputs. Meanwhile, the shoulder buttons and triggers aren’t as wide as the ones on the Pro controller, but they are chunkier. Beyond just extending the triggers back further, they have a longer pull distance, which makes them better suited for first-person shooters.

The Ultimate also has two rear buttons that are located across the curves of the handles on the back. My middle fingers rest perfectly on the buttons without having to alter my grip at all. If you haven’t used an 8BitDo controller with rear buttons before, they are low profile, so they really are buttons rather than triggers.

The joysticks use Hall Effect sensors, which mean that internal components do not rub together as you move the sticks. Instead, it uses a magnetic signal to register inputs. The Hall Effect sticks on the Ultimate have a tighter feel than the sticks on the Pro controller. It’s also important to note that Hall Effect technology eliminates the possibility for dreaded stick drift. 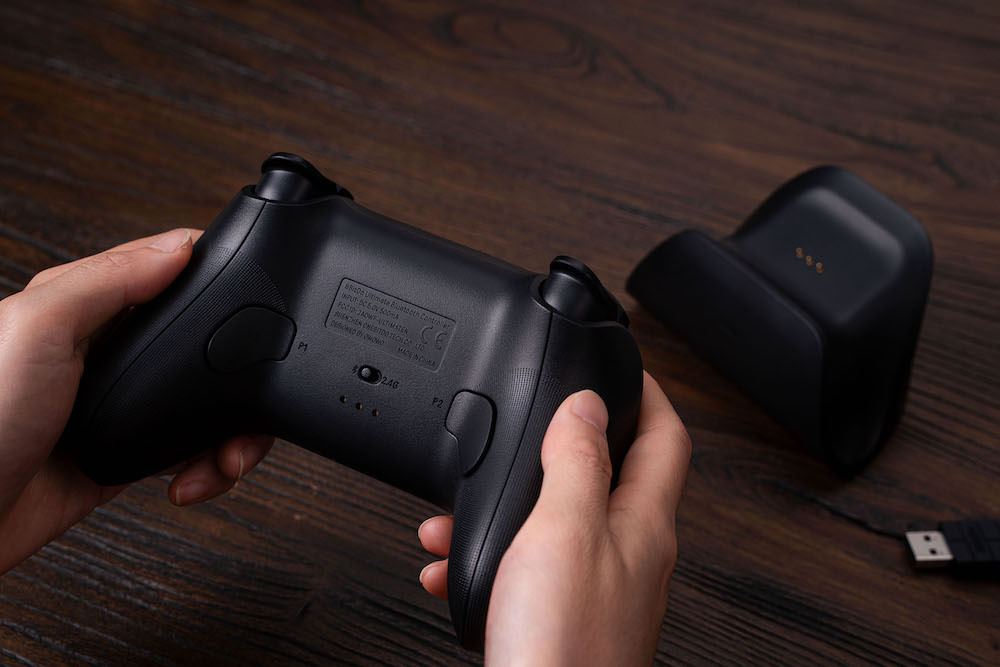 Two remappable buttons are located on the back of the controller.

Even if the controller’s main perks were simply better sticks and back buttons, it’d still be worth a look over the Pro controller. But where the Ultimate truly excels is with customization. 8BitDo has a proprietary app called Ultimate Software, which can be installed on iOS, Android, and PC. The app syncs up with the controller via Bluetooth and allows you to adjust settings on the fly. On a basic level, you can use the app to remap inputs and create profiles (up to three). You can also adjust stick tension, trigger sensitivity, rumble intensity, and set up macros. As mentioned already, the Ultimate has triggers with a longer pull distance and tighter sticks, so fine-tuning tension/sensitivity works exceedingly well and really allows you to personalize the experience to your liking.

The controller charging stand feels like an added bonus to an already wonderful controller. It matches the controller–either white or black–and has a USB-C port on the back. It connects to the USB port on your Switch or PC via the included cable. On the bottom of the stand, there’s a compartment that stows the 2.4GHz adapter. You have the option to connect the controller via Bluetooth or 2.4GHz wireless. The Bluetooth setting was very stable for me, with no noticeable input lag, but the option is there.

You’re probably wondering if you’d be missing any of the quirks of Nintendo’s controllers by going with a third-party controller? Yes, but only a couple of small things. The Ultimate has rumble, but it doesn’t have Nintendo’s “HD rumble.” That said, you can adjust the vibration intensity, so it’s good on this front. The Ultimate does have motion controls, too, in case you are partial to waving your Pro controller around. What it doesn’t have, however, is NFC support for Amiibo figures. That’s probably not a dealbreaker, but no third-party Switch controllers have this feature. 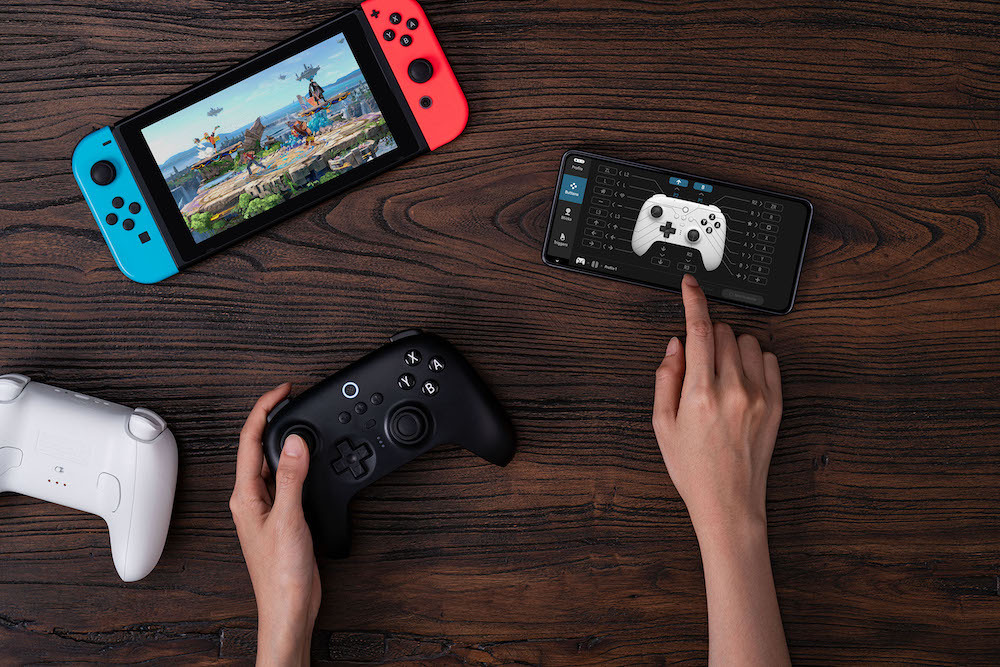 You can customize settings on the fly with the Ultimate Software

Though I’ve almost solely talked about the Ultimate as a Switch controller due to it surpassing the (awesome) Pro controller, it’s also fully compatible with PC. Of course, PC players have more options already, including Xbox and DualSense controllers, but the Ultimate is an excellent controller for PC players, too.

On that note, it’s worth mentioning that 8BitDo created two versions of the new Ultimate controller. The $70 edition is compatible with Switch and PC. There’s also a budget-friendly $50 version that solely offers 2.4GHz wireless and is compatible with PC, Raspberry Pi, and Android. Functionally the same controller, those who want it for PC should probably opt for the cheaper version–unless you plan on grabbing a Switch at some point. Plus, this version also offers a Pastel Pink color option and the face buttons are labeled like an Xbox controller, not a Switch controller. The only main difference outside of compatibility is that the Switch controller can last for 22 hours, whereas the 2.4GHz-only model runs for 15 hours between charges.

Regardless of which model you go with you, you’re getting a well-made controller with unique customization features that put it at the top of its class, especially at this price point. 8BitDo has been the best third-party controller manufacturer for years, and the Ultimate controller is just the latest example of that.