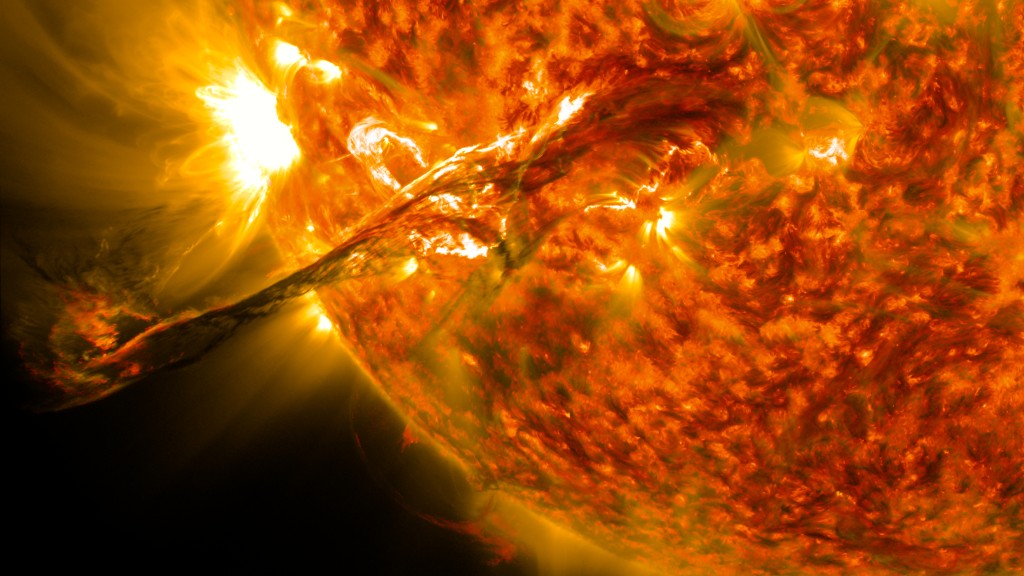 The Carrington Event was a large solar storm that took place at the beginning of September 1859, just a few months before the solar maximum of 1860. In August, 1859, astronomers around the world watched with fascination as the number of sunspots grew. Among them was Richard Carrington in Redhill, Surrey, U.K.

Fortunately for life on Earth, the sun is remarkably constant in the heat and light it radiates. However, it can also blast matter out into space, though for most of human history these ejections have gone unnoticed.

Today these phenomena, known as space weather, can have drastic effects on  satellites and other electronic technology on which we rely, according to the European Space Agency (ESA).

The origins of space weather can be traced to contortions in the sun’s magnetic field, leading to dark blotches or sunspots on its surface, according to an article by the NASA Earth Observatory.

It’s from these spots that solar flares, coronal mass ejections and other electromagnetic phenomena can emerge — with potentially hazardous consequences for our technological way of life.

Sunspot activity rises and falls on an 11-year cycle, and we’re currently approaching the next solar maximum in 2025. So now is a good time to look at the worst solar storms.

What is a solar storm?

While space weather ultimately originates on the sun, the term solar storm refers to occurrences on, or near, our own planet, when material thrown out by the sun reaches us. There are two distinct types of solar storm: Geomagnetic storms and solar radiation storms.

The first of these occurs when a clump of solar material, called a coronal mass ejection (CME), disrupts the Earth’s magnetic environment. The second refers to a stream of much faster moving particles ejected by the sun.

As dangerous as the latter sounds, we’re largely protected from its effects by the geomagnetic field, as are the majority of satellites in Earth orbit. As a consequence, solar radiation storms are only a really serious problem for deep space missions.

On Sep. 1, as Richard Carrington was sketching the sunspots, he was lucky enough to see a sudden flash of light — a solar flare — emanate from them. It was almost certainly accompanied by a CME, because the next day the Earth experienced an unprecedented geomagnetic storm, with telegraph systems going haywire and auroral displays – normally confined to northerly latitudes — visible in the tropics, according to an article by NASA Science.

Carrington put two and two together and realised that the solar flare he’d seen was almost certainly the cause of this massive geomagnetic disturbance. This was a connection that had never previously been made, according to an article by NASA Spaceflight. The solar storm of 1859 is now know as the Carrington Event in his honor.

The largest CMEs can contain billions of tonnes of solar material and fly out from the sun at up to 3,000 kilometers per second, according to the National Oceanic and Atmospheric Administration (NOAA)’s Space Weather Prediction Center.

They contain an embedded magnetic field, and it’s this that can play havoc with the Earth’s own magnetic field if and when it makes contact.

We know this has been happening since time immemorial; a study reported in January 2022 revealed that a powerful solar storm, which pummelled the Earth 9,200 years ago, left radioactive particles in the ice deep below Greenland that are still there to this day, Live Science reported.

An earlier study, from 2020, suggested that severe geomagnetic storms occurred in 42 of the preceding 150 years — far more often than had previously been thought.

NOAA ranks geomagnetic storms on a scale running from G1, causing an increase in auroral activity and minor fluctuations in power supplies, up to G5, which includes extreme cases like the Carrington event.

In the middle of the scale, G3 ‘storm warnings’ are relatively common; there was one at the end of March 2022. Even a G2 event is capable of causing havoc, as when SpaceX lost 40 satellites in Feb 2022 when a G2 storm prevented them reaching their intended altitude.

A composite image of the sun produced by the Solar Orbiter spacecraft in March 2022. (Image credit: ESA)Are solar storms dangerous?

It’s been conjectured that a storm on the scale of the Carrington event, if it happened today, could cause an internet apocalypse, sending large numbers of people and businesses offline. For this reason, the U.K. government lists adverse space weather as one of the most serious natural hazards in its National Risk Register, and companies have contingency plans to deal with severe events – as long as they have sufficient warning of them.

How likely is another Carrington Event? You can read about a recent study that estimated an answer to this question at EarthSky.org. Additionally, you can read more about the Carrington Event at the South African National Space Agency (SANSA) website.