After initially finding success with the iconic BlackWidow and then fine-tuning the competitive gaming keyboard design with the Huntsman, Razer is making a switch with its next flagship keyboard line. The Razer DeathStalker V2 family of keyboards brings a new look to the gaming peripheral giant by using low-profile optical switches and a thin chassis to usher in the sleekest and arguably most stylish keyboard Razer has made. The Razer DeathStalker V2 comes in multiple different models, with the focal point design being the DeathStalker V2 Pro, which is available now.

If you’re familiar with Razer’s various families of peripherals, DeathStalker might sound familiar. That said, the V2 bears little resemblance to the original, which was Razer’s membrane gaming keyboard. The DeathStalker V2 comes with Razer’s high-quality optical switches. You can choose between “Linear” and Clicky,” though the linear switch model is the only one available now. This is Razer’s first keyboard with low-profile optical switches, and they make a marked difference in the looks department while feeling as sturdy and durable as Razer’s traditional keycaps and switches.

The DeathStalker V2 has three distinct models: the Pro, Pro Tenkeyless, and the regular V2. The Pro is a full-length wireless keyboard with a numeric keypad. The Tenkeyless has the same design but drops the keypad. Meanwhile, the regular V2 is simply a wired version of the full-length model. The Tenkeyless model will only be available with linear switches, while the other two will support linear or clicky switches. 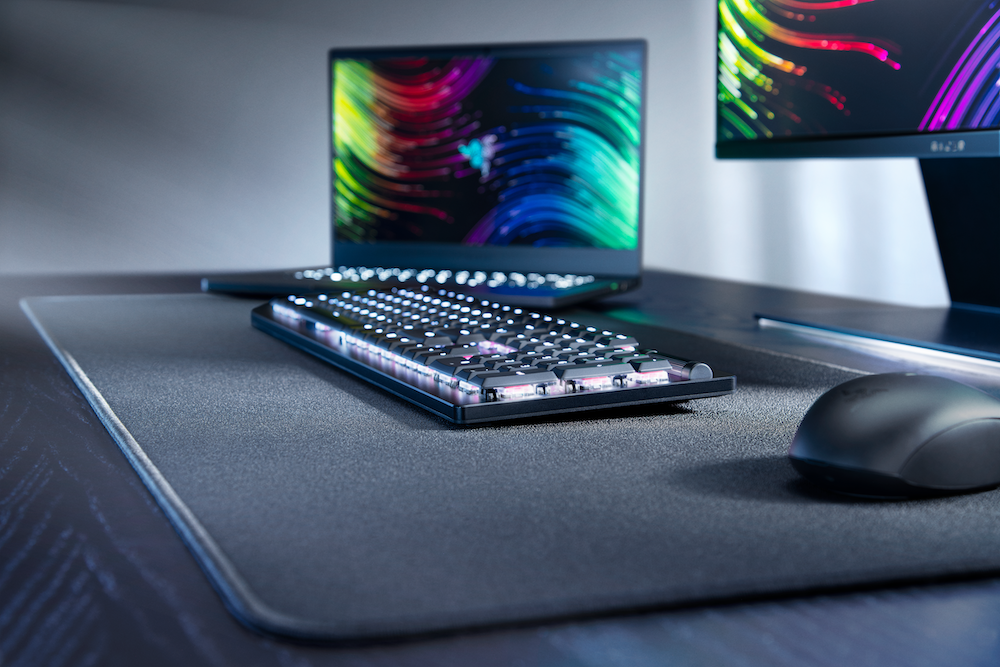 The low-profile keys and thin aluminum alloy chassis keep the DeathStalker V2 compact enough to not need a wrist rest. That’s a bit of rarity with modern gaming keyboards, as many of them come with wrist rests to improve ergonomics. The V2 is ergonomically sound out of the box. I typed on it all day with the legs flipped up for more than a week and never felt discomfort. The DeathStalker V2 is only 21mm thick in the front and 26.6mm in the back. That’s roughly half the height of the Huntsman V2.

A big part of the reason why I’m impressed with the DeatlhStalker V2 is because it looks and feels like a keyboard that you can use for both productivity and gaming. I’ve never liked using a gaming keyboard for work in the past; many gaming keyboards don’t offer an enjoyable typing experience, in my opinion. The DeathStalker’s low-profile linear switches feel far closer to a conventional keyboard you’d find on a laptop than most gaming keyboards. They are quiet but still provide satisfying feedback.

Of course, it’s primarily a keyboard aimed at gamers, and it doesn’t disappoint there either. The linear optical switches are extremely lightweight and require only 45 grams of force and 1.2mm of actuation to click. They are able to fully travel twice as far, down to 2.8mm. The clicky switches have 1.5mm of actuation per click, travel the same distance, and require slightly more force at 50 grams. 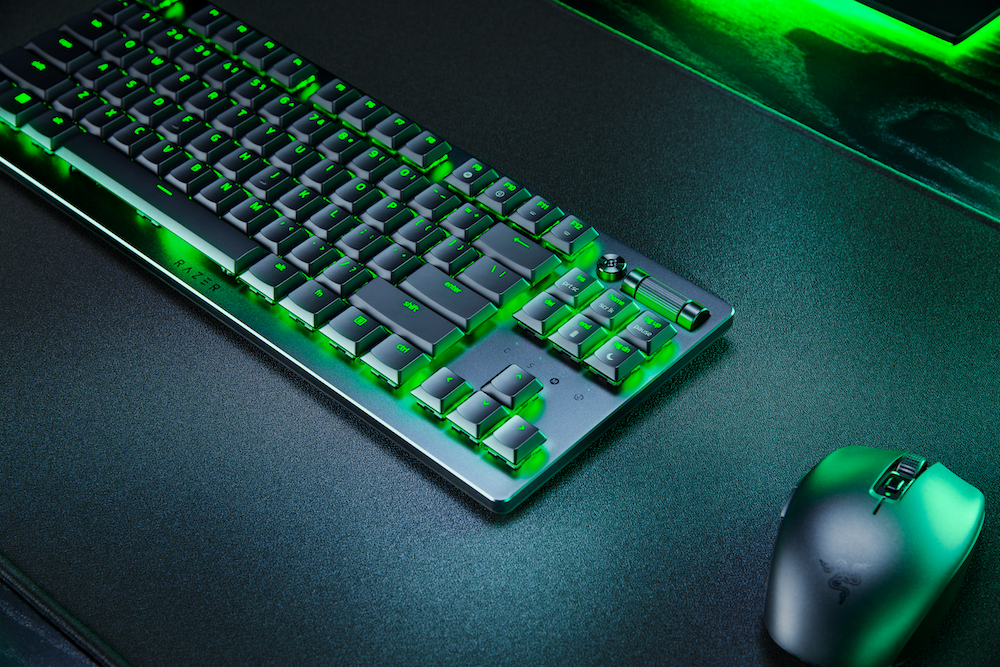 If you’ve used a Huntsman keyboard, you will be familiar with the linear and clicky optical switches. These are the same switches found in the Huntsman line–just in a low-profile form factor. I only tested the linear model, but I can say that despite having the same actuation point, travel distance, and force requirements, the DeathStalker V2 offers a smoother typing experience than other Razer keyboards with these optical switches. Perhaps it’s because I’m used to low-profile keyboards for typing, but the sleek design of the keycaps increased my speed versus Huntsman keyboards, both when gaming and typing. As is common with gaming keyboards, the V2 has N-key rollover for accuracy and precision.

The wireless versions of the DeathStalker V2 have multiple forms of connectivity; Razer’s Hyperspeed 2.4GHz tech and Bluetooth 5.0. Offering Bluetooth–with up to three device profiles–in addition to the gaming-centric Hyperspeed connection further solidifies the V2 as a versatile keyboard that is fit for both the office and the gaming room. The DeathStalker V2 Pro and TKL models run for 40 and 50 hours, respectively, between charges via USB-C.

It wouldn’t be a Razer keyboard without Chroma RGB backlighting, which unsurprisingly looks great on the DeathStalker V2. Razer cleverly placed the secondary functions of keys next to the primary function, so each of them are clearly visible and backlit. The legends are laser-etched onto the keycaps and the keycaps have a durable coating, which Razer says will keep the printing from fading. The switches are graded for 70 million clicks.

The DeathStalker V2 naturally has some key features designed just for gaming in mind, including Razer Synapse support. Using the on-board memory and cloud storage, you can save up to five control profiles. It has a dedicated “gaming mode” key to remap inputs and create macros. In the upper right-hand corner there’s a handy media button and roller.

« Deep dive – Under the waves with Croatian Special Forces and US Navy SEALs » Sentiment and inflation: Factors putting pressure on Bitcoin price