This year’s The Elder Scrolls Online adventure will take players to a never-before-seen location with the new High Isles chapter, along the way diving deep into a culture that has yet to be explored in much detail in the lore.

A story of political intrigue awaits players on the island. Delegates from the three factions that are battling it out in the game’s Three Banners War have come to discuss peace terms on the island getaway, but a secret society known as the Ascendant Order has other plans. Players will unravel the mystery of the Ascendant Order, its motives, and its leaders in a story that The Elder Scrolls Online creative director Rich Lambert described as a return to the storytelling roots of the Elder Scrolls franchise.

“It’s definitely that more politically focused storyline rather than the cosmic daedric lords are going to invade, take over and enslave everybody,” Lambert said. “It’s a fresh new take, it’s something we haven’t done in a very long time, and it’s something we really wanted to dig into and kind of go back to our roots on.”

Breton culture is inspired by the feudalistic European society fans of Western medieval fantasy are no doubt familiar with, one filled with lords and ladies, knights in shining armor, and majestic castles. While that might sound like something many fantasy fans have seen before, Lambert stressed that the High Isle and Breton culture still has that signature Elder Scrolls style. 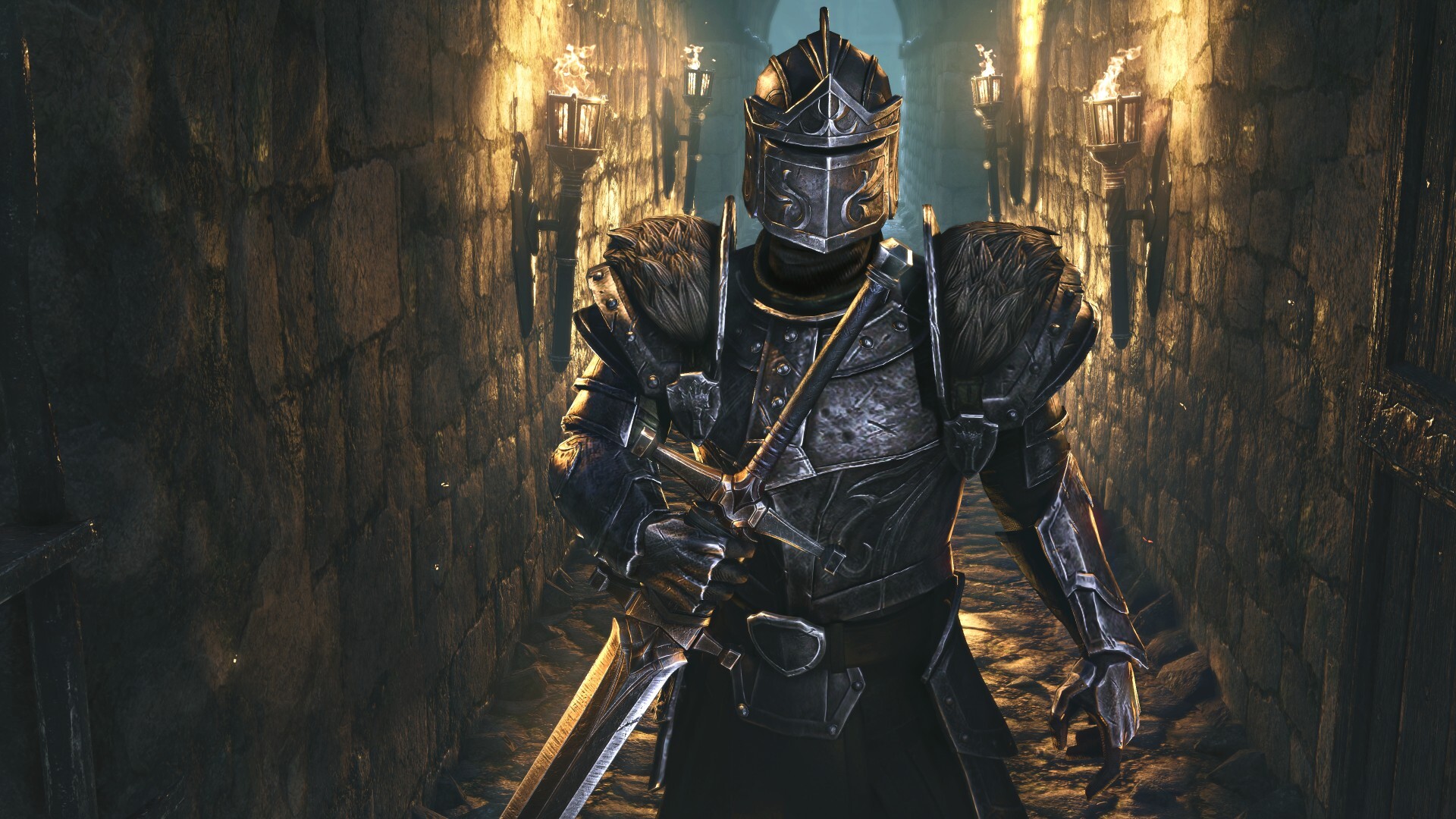 “It’s the Elder Scrolls angle,” he said. “There isn’t a single source of truth. We are definitely a lot more focused on the politics and showing that. It’s a novel thing in Elder Scrolls, and Bretons and their culture have never really been explored before.”

Fans of the franchise have been endlessly debating on the setting for The Elder Scrolls VI, which some believe based on the game’s initial teaser trailer to be centered around the Breton province of High Rock (Hammerfell is another likely possibility). If that is the case, High Isle could potentially step on some toes in regards to whatever Bethesda Game Studios is cooking up. While Lambert had little to say on that subject, he did talk about how ZeniMax Online works closely with Bethesda Game Studios to keep the world and lore of the Elder Scrolls universe consistent.

“We can just have frank discussions,” Lambert said. “‘Hey, this is what we’re thinking, this is what we want to do. These are the reasons why. Steer us in the right direction, make sure we’re not going afoul of lore or going afoul of other things.’ And they work with us really closely with that kind of stuff and help us navigate those waters, which is amazing.”

While High Isle will bring all the usual content included with a new chapter–new public dungeons, world events, delves, and more–it will also see the introduction of a whole new distraction within the world of Tamriel: a playable card game. 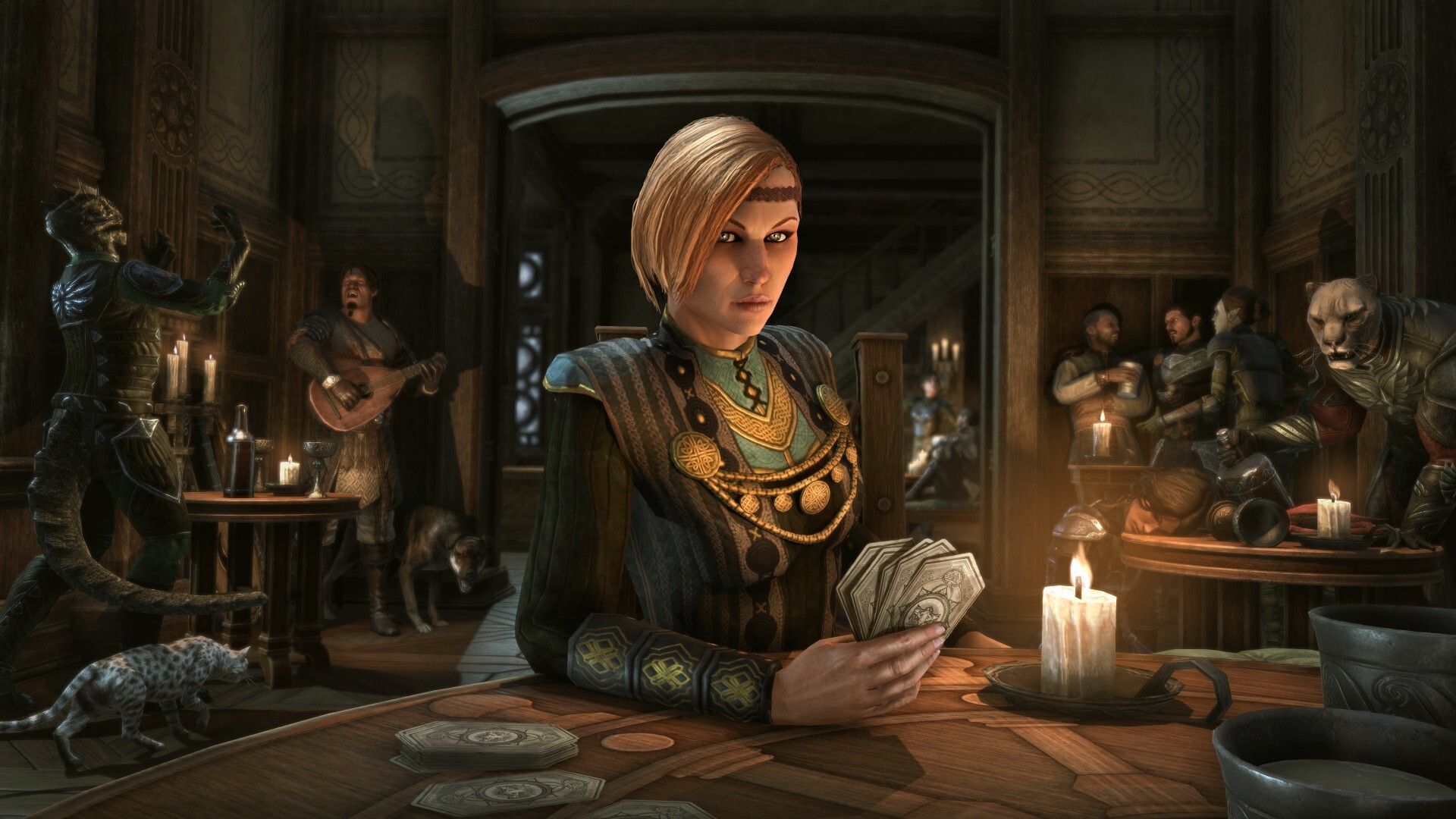 Called Tales of Tribute, the card game is a resource-building focused on strategy. Each player selects two decks, which are then all shuffled together. Players then play from that shared pool of cards to build resources and acquire more victory points than their opponent. Because decks are shuffled together, players who have unlocked or upgraded more cards won’t be at a distinct advantage over new players. Lambert said the inspiration for Tales of Tribute came less from collectible card games and more from games you might play at a tavern or pub while you are waiting for your friends to show up or just killing time.

Players will be able to challenge each other in Tales of Tribute directly or in taverns, and players who want to find an opponent quickly can also find a match using the game’s group finding system. There’s a single-player component too, with a unique Tales of Tribute storyline that sees players challenging various NPCs throughout the world. Tales of Tribute will have its own rewards for players to unlock through playing, including new decks, upgraded cards, and items of use outside the card game like housing items, cosmetics, crafting materials, and more. Lambert said there are 12 decks to collect, with players earning four decks after completing the card game’s tutorial.

Of course, launch is just the beginning, and Lambert said if there is demand among the community for more cards and decks that the team will continue to add more. Lambert said that ZeniMax Online has continued to support various game systems that have proven popular with players, using the game’s Antiquities and Companion systems as examples, and Tales of Tribute will be no different. Speaking of the Companion system, Legacy of the Bretons will introduce two new recruitable companions for players to team up with in the form of Ember and Isobel. Ember is a street-smart Khajiit with a “knack for magic” while Isobel is an aspiring Breton knight.

Overall, Lambert said the High Isles includes roughly 30 hours of new quest content, including side stories where players will get to learn more about Breton culture and lore. Like other ESO chapters, players won’t need to grind through old content to experience High Isle. Players can instead jump right in and start leveling with the latest chapter.

“There’s really something here for all types of players, and we are super excited obviously for the trading card game,” Lambert said. “We can’t wait for players to start digging in.”

The Elder Scrolls Online: High Isle chapter which will launch June 6 for PC, Mac, and Stadia and arrive on Xbox and PlayStation consoles June 21.