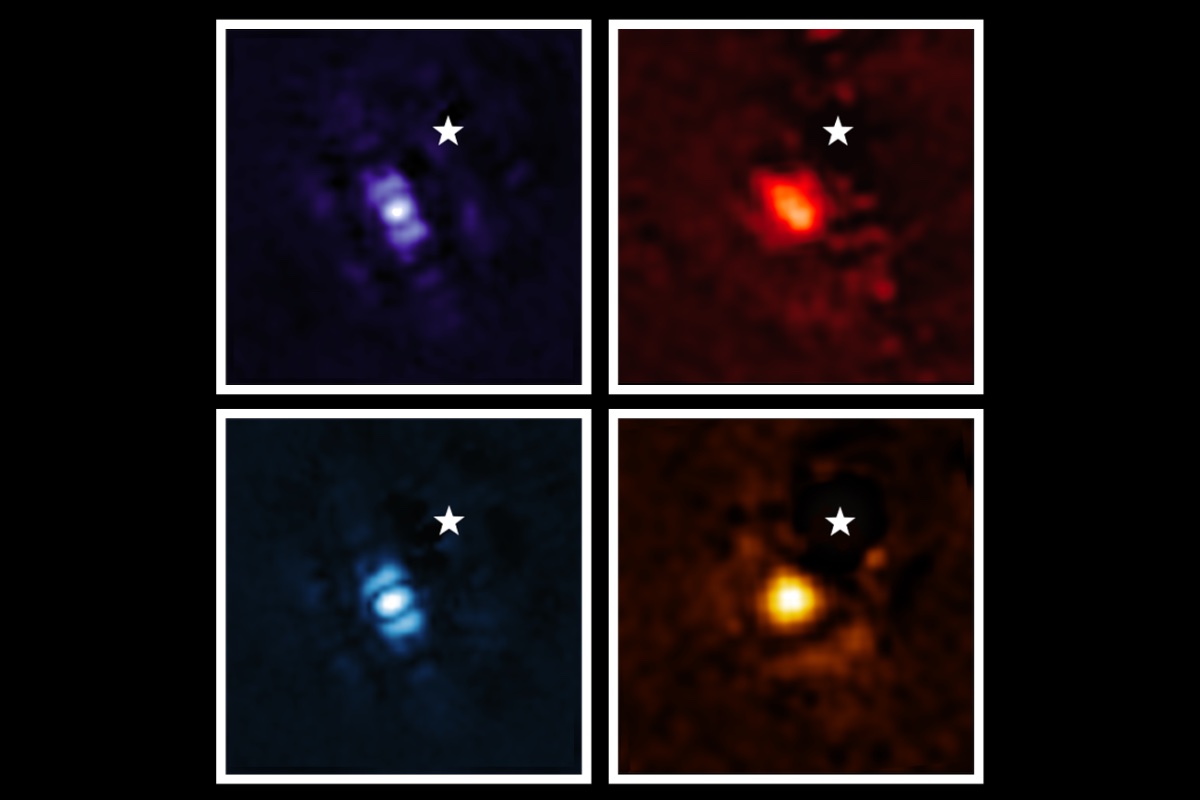 This series of four images for the James Webb Space Telescope shows the first exoplanet (star) seen by the powerful infrared telescope. (Image credit: NASA/ESA/CSA, A Carter (UCSC), the ERS 1386 team, and A. Pagan (STScI))

The new images reveal JWST will be a fantastic tool for astronomers aiming to improve their knowledge of exoplanets (planets around other stars) — even better than we had hoped it would be!

But for those who’ve grown up on a diet of Star Trek, Star Wars, and myriad other works of science fiction, the images may be underwhelming. No wonderful swirling clouds, in glorious or muted colors. Instead, we just see a blob — a single point of light.

So why do these observations have astronomers buzzing with excitement? And what might we learn in the months and years to come?

Over the past three decades, we have lived through a great revolution — the dawn of the Exoplanet Era. Where we once knew of no planets orbiting distant stars, and wondered whether the Solar System was unique, we now know planets are everywhere.

At the time of writing, the number of known exoplanets stands at 5,084 (opens in new tab), and the count grows larger with every week.

But the overwhelming majority of those exoplanets are detected indirectly. They orbit so close to their host stars that, with current technology, we simply cannot see them directly. Instead, we observe their host stars doing something unexpected, and infer from that the presence (opens in new tab) of their unseen planetary companions.

Of all those alien worlds, only a handful have been seen directly. The poster child for such systems is HR 8799 (opens in new tab), whose four giant planets have been imaged so frequently that astronomers have produced a movie showing them moving in their orbits around their host star.

To gather JWST’s first direct images of an exoplanet, astronomers turned the telescope towards the star HIP 65426, whose massive planetary companion HIP 65426b was discovered using direct imaging back in 2017 (opens in new tab).

HIP 65426b is unusual in several ways — all of which act to make it a particularly “easy” target for direct imaging. First, it is a long way from its host star, orbiting roughly 92 times farther from HIP 65426 than the distance between Earth and the Sun. That puts it around 14 billion kilometres from its star. From our point of view, this makes for a “reasonable” distance from the star in the sky, making it easier to observe.

Next, HIP 65426b is a behemoth of a world — thought to be several times the mass of the solar system‘s biggest planet, Jupiter. On top of that, it was also previously found to be remarkably hot, with temperature at its cloud tops measuring at least 1,200 degrees Celsius.

This combination of the planet’s size and temperature means it is intrinsically bright (for a planet).

JWST’s first images of an alien world, HIP 65426b, are shown at the bottom of a wider image showing the planet’s host star. The images were taken at different wavelengths of infrared light. (Image credit: NASA/ESA/CSA, A Carter (UCSC), the ERS 1386 team, and A. Pagan (STScI).)

How were the images taken, and what do they show us?

To get around this problem, JWST carries several “coronagraphs” (opens in new tab), instruments that let the telescope block the light from a bright star to look for fainter objects beside it. This is a bit like blocking the headlights of a car with your hand to see whether your friend has climbed out to say hello.

Using these coronagraphs, JWST took a series of images of HIP 65426b, each taken at a different wavelength of infrared light. In each image, the planet can be clearly seen – a single bright pixel offset from the location of its obscured stellar host.

The images are far from your standard science fiction fare. But they show that the planet was easily detected, standing out like a sore thumb against the dark background of space.

The researchers who led the observations (detailed on the preprint server arXiv (opens in new tab)) found that JWST is performing around ten times better than expected – a result that has astronomers around the globe excited to see what comes next.

Using their observations, they determined the mass of HIP 65426b (roughly seven times that of Jupiter). Beyond that, the data reveal the planet is hotter than previously thought (with cloud tops close to 1,400 degrees C), and somewhat smaller than expected (with a diameter about 92% that of Jupiter).

These images paint a picture of an utterly alien world, different to anything in the solar system.

A signpost to the future

The observations of HIP 65426b are just the first sign of what JWST can do in imaging planets around other stars.

The incredible precision of the imaging data suggests JWST will be able to obtain direct observations of planets smaller than previously expected. Rather than being limited to planets more massive than Jupiter, it should be able to see planets comparable to, or even smaller than, Saturn.

This is a really exciting. You see, a basic rule of astronomy is that there are lots more small things than big things. The fact JWST should be able to see smaller and fainter planets than expected will greatly increase the number of possible targets available for astronomers to study.

Beyond that, the precision with which JWST carried out these measurements suggests we will be able to learn far more about their atmospheres than expected. Repeated observations with the telescope could even reveal details of how those atmospheres vary with time.

In the coming years, then, expect to see many more images of alien worlds, taken by JWST. While those pictures might not look like those in science fiction, they will still revolutionize our understanding of planets around other stars.

Follow all of the Expert Voices issues and debates — and become part of the discussion — on Twitter @Spacedotcom and on Facebook. The views expressed are those of the author and do not necessarily reflect the views of the publisher.