The sun as you’ve never seen it: European probe snaps closest-ever photo of our star 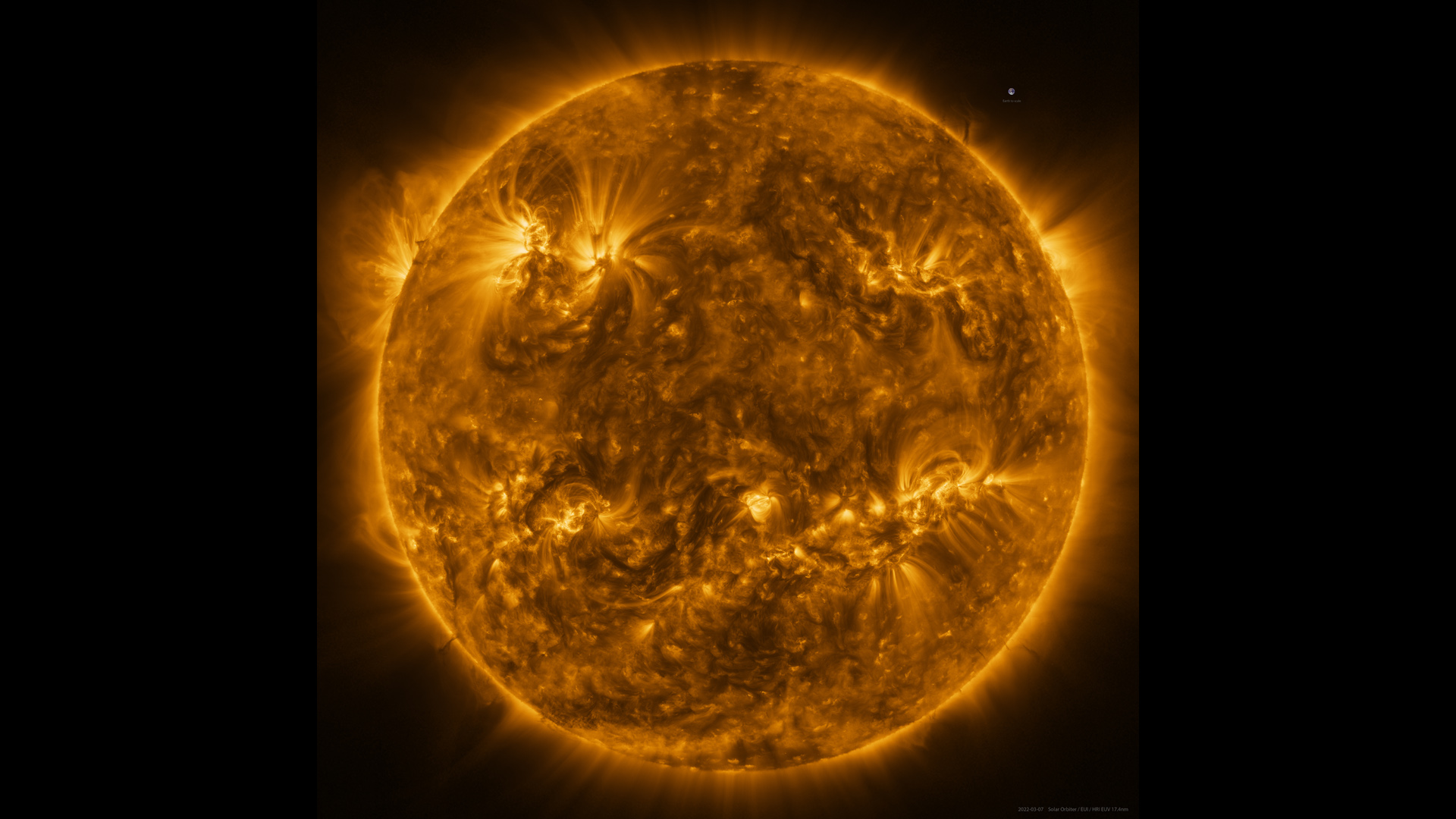 The sun as seen by Solar Orbiter in extreme ultraviolet light from a distance of roughly 46 million miles (75 million kilometers). The image is a mosaic of 25 individual images taken on March 7 by the high resolution telescope of the Extreme Ultraviolet Imager (EUI) instrument. (Image credit: ESA)

The European sun-chasing spacecraft Solar Orbiter has snapped the closest images of the sun ever taken, revealing the finest details of our star’s outer atmosphere, the corona.

The images were taken on March 7, when Solar Orbiter was exactly halfway between Earth and the sun, at a distance of 46 million miles (75 million kilometers) from both bodies.

One of the instruments turned on during this opportunity was the Extreme Ultraviolet Imager (EUI), which sees the universe in  the highest-energy part of the ultraviolet component of the electromagnetic spectrum.

Due to Solar Orbiter’s close proximity to the sun EUI had to take 25 individual shots to image the entire solar disk, the European Space Agency (ESA) said in a statement. It took four hours for the EUI team to capture all the segments, as each shot required a 10-minute period, including the time needed to repoint the spacecraft, ESA said.

And better images are coming soon. Since the spacecraft’s launch in February 2020, ground control teams have been gradually tightening Solar Orbiter’s trajectory around the star at the center of our solar system. While the two previous perihelions — the points in the spacecraft’s elliptical orbit closest to the sun — took place at about half the sun-Earth distance (47.8 million miles or 77 million km), Solar Orbiter is now heading for a much closer encounter.

On Saturday (March 26) at 7:50 am EDT (1150 GMT), the spacecraft will zoom past the sun at a distance of only 30 million miles (48.3 million km), about a third of the sun-Earth distance, ESA’s Solar Orbiter deputy project scientist Yannis Zouganelis told Space.com.

Solar Orbiter’s distance from the star will then start to increase again, but its future close passes will take it even closer: just 26 million miles (42 million km) away from the sun’s surface. No other spacecraft equipped with a camera has ever gotten this close to the sun. NASA’s Parker Solar Probe makes deeper dives toward the star, up to a few million miles away, but due to the extremely high temperatures at those distances, the spacecraft can’t carry a sun-facing camera.

The closest ever images of the sun in the extreme ultraviolet light captured by the ESA/NASA Solar Orbiter on March 7, 2022. (Image credit: ESA)