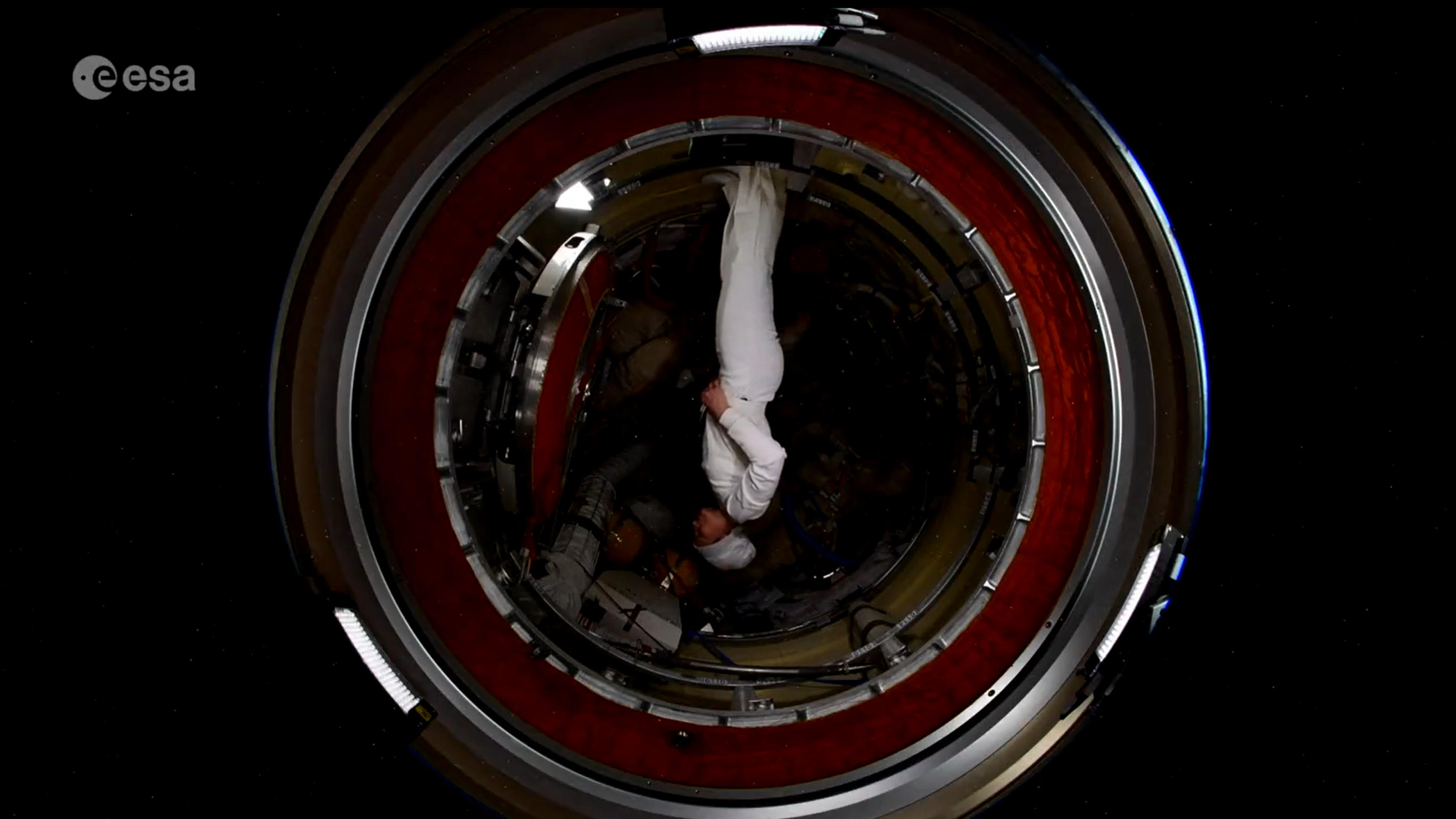 Samantha Cristoforetti was bound for the International Space Station this past April, with a special spare-time mission: to cosplay (opens in new tab) as the famous flight attendant from “2001: A Space Odyssey.” (In the 1968 film, the unnamed character played by Edwina Carroll inches around a space station hatch until she is completely inverted (opens in new tab) in the camera’s view.)

To replicate the attendant’s Pan-Am-style costume, Cristoforetti needed a full-length white body suit topped with a snow-colored cap. “That is not something that I would buy for myself, normally,” Cristoforetti told Space.com during a post-flight press conference with other SpaceX Crew-4 members on Thursday (Oct. 20). “But it seemed to fit perfectly for that need.”

The picture-perfect movie replica was a demonstration of the teamwork Cristoforetti inculcated during her brief command of space station activities, along with her six-month orbital Expedition 67/68 mission, which concluded on Oct. 14.

“You have to make good use of the time you have with those guys to set them up for success,” the European Space Agency (ESA) astronaut said of her two-week time in charge of as many as 10 people, which included overseeing moonbound science for the Artemis program and two crewed spacecraft arriving or departing.

To get the “2001” mood together, a SpaceX training technician helped Cristoforetti figure out how to hang herself upside down with Velcro, and Russian cosmonaut Sergey Korsakov sourced a Velcro-infused hatch on his country’s side of the space station where Cristoforetti could do the walk-around.

After filming in orbit, ESA video experts on the ground cut the raw footage into a rhythmic march timed to the fanfare opening of “Also Sprach Zarathustra,” which is the 1896 orchestral composition by composer Richard Strauss that every space fan instantly associates with “2001.”

The cosplay Cristoforetti did in orbit this year (she also played characters from the 2013 film “Gravity” and the 2005 TV series “Battlestar Galactica“) pushed her out of her comfort zone, as she said she has seen “about 15 movies” in her life. The film “2001,” however, is an exception.

“I have actually watched [that] multiple times, and I really enjoy and appreciate it deeply as a work of art, and something that has really influenced our visual imagination when it comes to space,” she said. “It’s decades old now, but it doesn’t feel old. It feels very, very current and invaluable.”

Cristoforetti emphasized that, in space, the mission of staying safe, performing science and maintaining a 20-year-old space station comes first. But the first person to do a space TikTok added that any moments she can spare to make a new connection is great for public engagement — and for team-building.

That’s because crew engagement is key to orbital productivity. To boost both, the NASA astronauts flying with Cristoforetti on the Crew-4 mission bonded over foodie moments. Cristoforetti, an Italian, supplied a “plethora of olive oil” to enhance orbital meal-making, according to Crew-4 pilot Bob Farmer, who admitted to loving the cuisine her country is famous for: “I think I was kind of a lasagna guy, for the most part,” he said.

Mission specialist and first-time flyer Jessica Watkins discovered that putting anything in a tortilla “made it at least 10% more delicious,” including a burger patty combination she invented that included macaroni, cheese and “just a dab of barbecue sauce.” The “Watty burger,” as her Crew-4 members called it, “kind of became a thing.”

Crew-4 spacecraft commander Kjell Lindgren had so many Watty burger cravings that “I became notorious for putting more food into a tortilla than was probably wise, or possible,” he recalled. “One night, Bob was witness to a triple-decker — I put an extra side in there — and he claimed I unhinged my jaw to be able to eat.”

Crew-4 commander Kjell Lindgren: “I became notorious for putting more food into a tortilla than was probably wise, or possible.” (Image credit: NASA)

Growing food also brought the astronauts together, with the crew leaving behind tomatoes for the newly arrived SpaceX Crew-5 team to enjoy. But Lindgren said there’s one mystery he hopes to solve before going back: the wavelength of Pepto Bismol-colored light the crew’s peas, tomatoes and onions sunbathed in.

“It was pink. Very pink. Definitely knew when the light was on, because the whole Columbus module would glow in pink,” Lindgren joked. But whatever wavelength it was, the ultra-rosy light was doing the right thing: “The smell of the plants was absolutely amazing.”