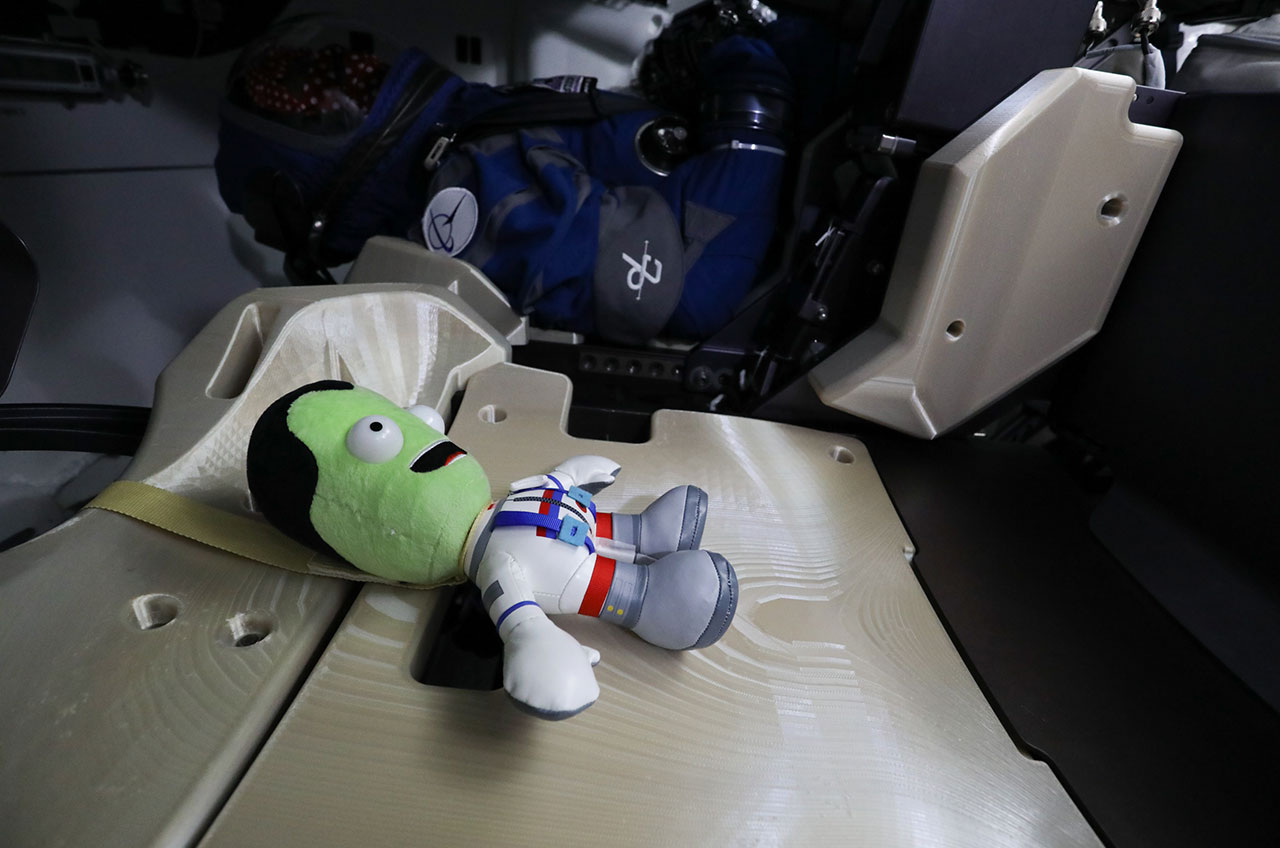 In the spaceflight simulation game Kerbal Space Program, if the rocket you design does not reach its desired orbit or destination, you return to the (virtual) hangar to try to correct your problems and then launch again.

It seems only appropriate then that the first real-life flight of a Kerbal — the green humanoid aliens that populate the video game — should be on Boeing’s second attempt and first success at docking its CST-100 Starliner crew spacecraft to the International Space Station.

Jebediah Kerman, or “Jeb” as he is better known to Kerbal Space Program fans, is one of four original “Kerbonauts” in the game and now the first to actually be launched into space — in the form of a plush toy. Jeb officially flew as the “zero-g indicator” for Boeing’s Starliner Orbital Flight Test-2 (OFT-2), which arrived at the space station on Friday (May 20), the day after launching on a United Launch Alliance (ULA) Atlas V rocket from Cape Canaveral and two and half years after the first Starliner test flight was cut short by software issues.

Boeing’s Starliner Orbital Flight Test-2 zero-g indicator, a plush Jeb from the game Kerbal Space Program, is seen through a window into the space capsule. Jeb is seated next to “Rosie the Rocketeer,” an anthropometric test device. (Image credit: Boeing via collectSPACE.com)

In between flights, Boeing engineers performed a thorough review and conducted full-up tests, similar to what Kerbal Space Program players do between attempts in a simplified way. In both cases, the end result is mission success.

Jeb’s presence aboard the Starliner was kept a secret until the uncrewed capsule successfully docked to space station. He was left for the station’s Expedition 67 crew to discover floating on the end of a tether when they opened the hatch to the commercial spacecraft.

The Kerbonaut was chosen for the OFT-2 mission to represent the enthusiasm many on the Starliner engineering team have for the game, as well as the science, technology, engineering and mathematics (STEM) lessons it imparts to players, a Boeing spokesperson told collectSPACE.com.

“If you’re playing Kerbal Space Program, or doing anything really, you need the perfect co-pilot,” the company wrote. “Take Jeb with you on all of your expeditions in his 9-inch plushy form! He’s still just as courageous.”

Zero-g indicators — referred to as such because they begin to float when their ride enters the microgravity environment of space — are a custom that was first started by Soviet-era cosmonauts. As NASA astronauts began flying with their Russian counterparts, they embraced the tradition and now zero-g indicators have become a part of U.S. commercial spaceflights.

Boeing’s first Starliner flight test, OFT-1 in 2019, launched with a spacesuit-clad Snoopy doll as its zero-g indicator. Although the mission returned to Earth before it could reach the space station, Boeing released video of the Charles Schulz comic strip beagle floating above his seat on board the capsule.

Jeb will spend several days at the station before the crew closes the hatch to the Starliner and sends him on his way home. Pending acceptable weather conditions, the Starliner will undock and return to Earth for a parachute and airbag-cushioned touchdown at the White Sands Missile Range in New Mexico.