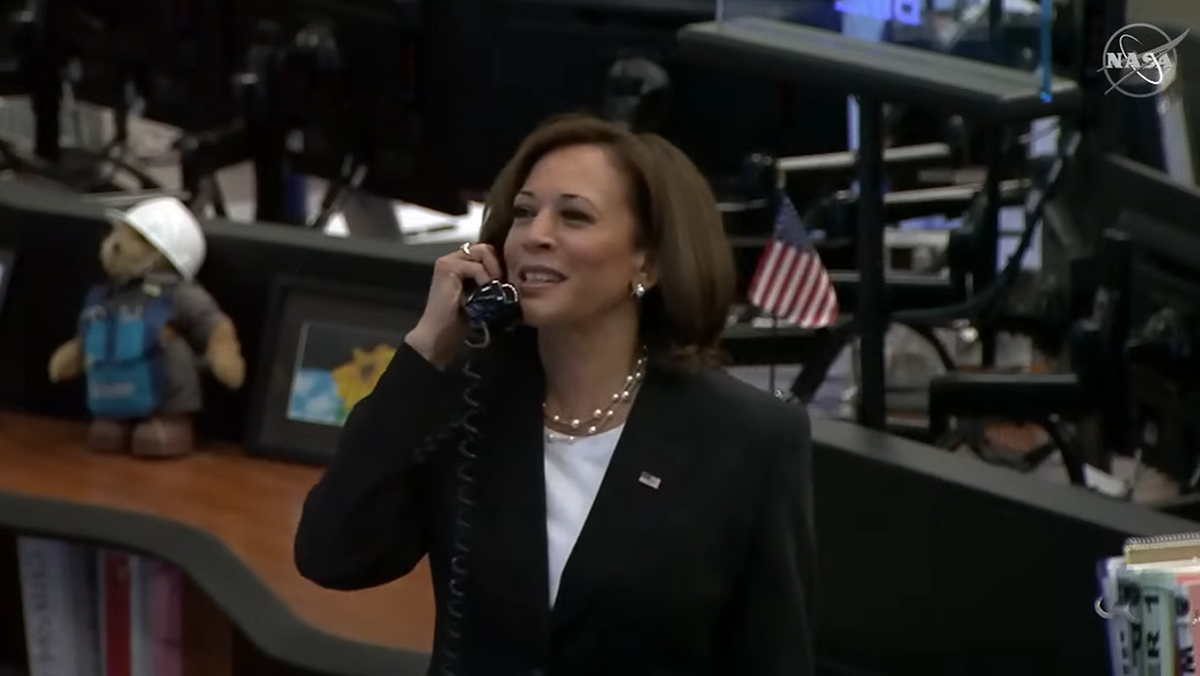 In a brief call to the International Space Station (ISS) this morning, Harris, who also chairs the National Space Council, spoke about the importance of protecting Earth and joining forces to meet other space goals.

“Tell us what you are learning on the space station that is helping us be smarter around how we take care of Earth,” Harris said to Expedition 67 astronauts Jessica Watkins, Kjell Lindgren and Bob Hinds. Harris spoke from Mission Control at NASA’s Johnson Space Center (JSC) in Houston during a tour.

Related: Presidential visions for space exploration: From Ike to Biden

Watkins said the astronauts are learning lots of things on the ISS. Examples include, she said, how to “grow plants without soil, and being able to use that back on Earth to help with food security.” Watkins also cited research about cell aging, which could help researchers “think about how we can help with immune cell aging back on Earth.”

Scheduling constraints and satellite connections cut the scheduled call a little short, but Harris will be on the space beat throughout today: She will chair her second National Space Council meeting, which is scheduled to begin at 2:20 p.m. EDT (1820 GMT), according to the vice president’s schedule (opens in new tab). You can watch it live here at Space.com.

At the meeting, which will take place at JSC, Harris is expected to reaffirm the NASA ISS extension to 2030, to give more details on new rules for commercial space activities, and to announce new regional training pilot programs through space companies including Blue Origin, Boeing, Lockheed Martin and Northrop Grumman, according to information provided by the White House on background.

The National Space Council, which helps shape American space policy, has already set out some priorities for the administration of President Joe Biden. The first meeting, which occurred last December, saw Harris discuss addressing climate change with satellites and scrutinizing the space junk issue. And this year she has begun talking about the agency’s Artemis program, which is focused on putting boots on the moon in the 2020s.

Harris also will release an Interagency Roadmap (opens in new tab) today focused on science, technology, engineering and mathematics (STEM), in an effort to boost and diversify the nation’s space workforce, the White House stated.

The vice president has been busy on the space scene in recent weeks. She flew down to Florida’s Space Coast for the planned Aug. 29 launch of NASA’s Artemis 1 mission to the moon, which was scrubbed due to a technical issue. (The next opportunity is no sooner than Sept. 23).

While in Florida, Harris toured NASA’s Kennedy Space Center to view Artemis hardware, and today her agenda includes a tour of  JSC. Her visit will focus on the Space Vehicle Mockup Facility, where crews and support personnel alike train for missions, NASA stated (opens in new tab).