‘We choose to go to the moon…’ again: NASA marks 60th anniversary of JFK speech 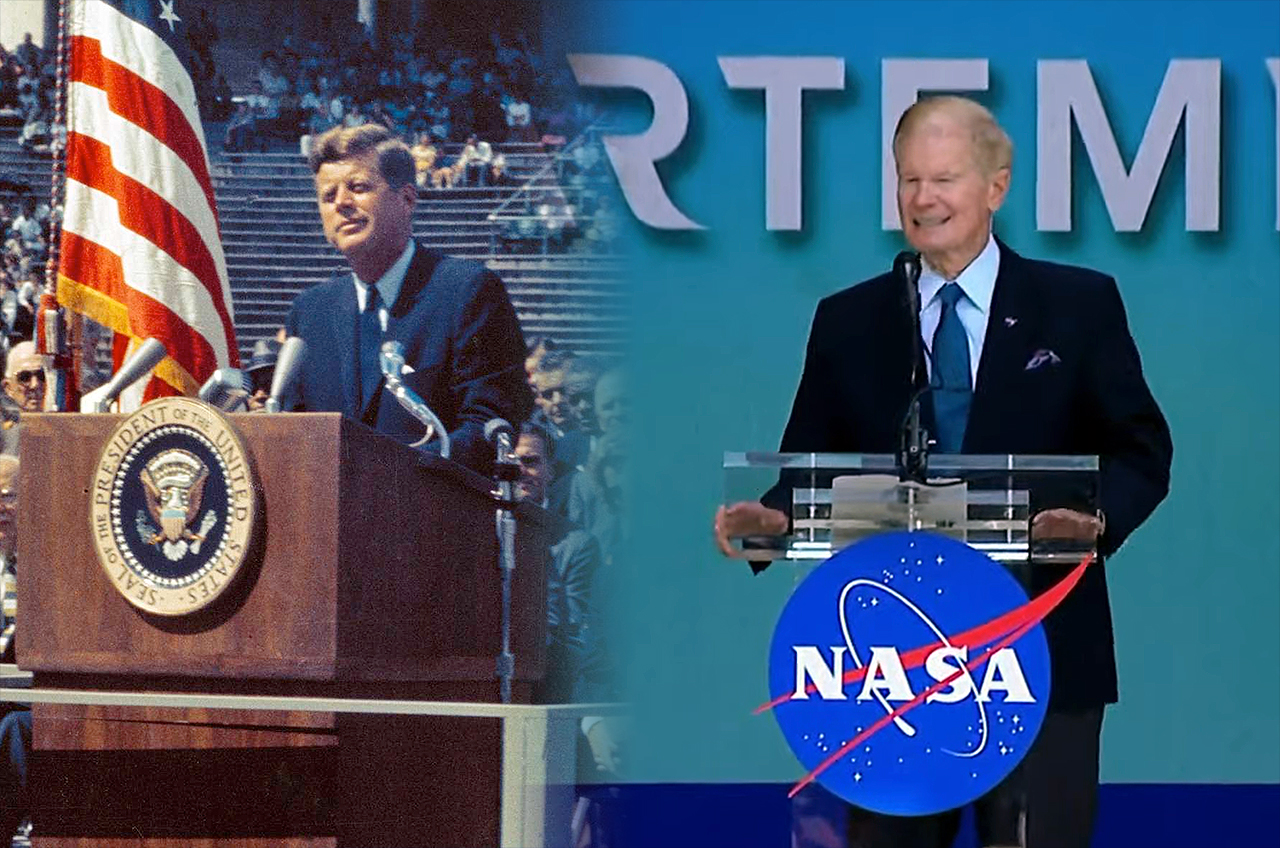 As NASA once again prepares to set sail “on the most hazardous and dangerous and greatest adventure” on which humanity has ever embarked, the space agency’s leaders returned to the site where 60 years ago, to the day, President John F. Kennedy reconfirmed that “we choose to go to the moon.”

NASA Administrator Bill Nelson joined other program officials at Rice University in Houston on Monday (Sept. 12) to mark the 60th anniversary of Kennedy’s speech (opens in new tab), which rallied the nation to land astronauts on the moon. Kennedy first set the goal during an address to Congress in May 1961 and, with the speech at Rice, it led to the six Apollo lunar landing missions between 1969 and 1972.

“Throughout America’s story, there are defining days. Days when minds change, hearts fill and imaginations soar. Days when visions transformed the trajectory of the American story, which is our story, and one of those days happened 60 years ago,” said Nelson, addressing an audience of invited guests, NASA alumni and thousands of Houston-area students at Rice Stadium. “On that day 60 years ago, seven famous words that you’ve heard repeated carried across this stadium and across the country: We choose to go to the moon.”

“The space program [was] propelled to the forefront of culture and consciousness. It galvanized a historic effort that we are now the stewards of,” he said.

While looking back, Nelson also drew parallels to the challenges NASA now faces as it nears the launch of the Artemis 1 mission, an uncrewed test flight that is intended to clear the way for sending a new generation of astronauts to circle the moon and land at the lunar south pole (opens in new tab).

“Now the Artemis generation is about to leave quite a mark,” said Nelson. “This generation — all of you, students from all over America, students throughout the world — this generation will choose to go to Mars, and that journey begins right now with humanity’s return to the moon.”

“Obviously, we had all hoped that Artemis 1 would already be on the way (opens in new tab) to the moon,” he said. “But the NASA team has been working around the clock, and their resolve and perseverance are unrivaled. I have full faith in this team and the mission. We will launch when we are ready, but mark my words: We are going.”

“Today is a day to reflect on how far we have come and to reaffirm our commitment to the exploration of space for the benefit of all,” said Kjell Lindgren, who with his Expedition 67 crewmates joined the celebration through a video sent down from the International Space Station. “The Apollo program was an awe-inspiring example of what we are capable of when we commit our talents and resources to a complex goal. We are proud to continue that bold tradition today. “

Leading up to and through Monday’s event, NASA and a number of its industry partners set up exhibits at Rice to showcase the state of space exploration six decades after JFK’s speech. Among the companies that took part were Ad Astra Rocket, Axiom Space, Boeing, Collins Aerospace, Intuitive Machines and Jacobs.

NASA artwork marking the 60th anniversary of President John F. Kennedy’s “We Choose to Go” speech, which he delivered at Rice University in Houston on Sept. 12, 1962. (Image credit: NASA)

In addition to spurring on the space race with the former Soviet Union, JFK’s speech prompted Rice University to form a dedicated space science department, the first in any academic institution.

“With seven words, ‘we choose to go to the moon,’ President Kennedy changed the course of human history and cemented Rice University’s place in the lore of America’s space program,” said DesRoches. “By the time Apollo 11 landed, several dozen graduate students and countless undergraduates had helped build instruments that made historic breakthroughs and remain on the surface of the moon today.”

Rice University’s football team, the Owls, commemorated the anniversary with a special uniform at its opening home game on Saturday. Created in partnership with NASA and Adidas, the uniform featured excerpts of JFK’s “We Choose to Go” speech on its shoulder and a custom Rice space logo that represented the flight path from Earth to space. (Rice won the game, beating McNeese State 52-10.)