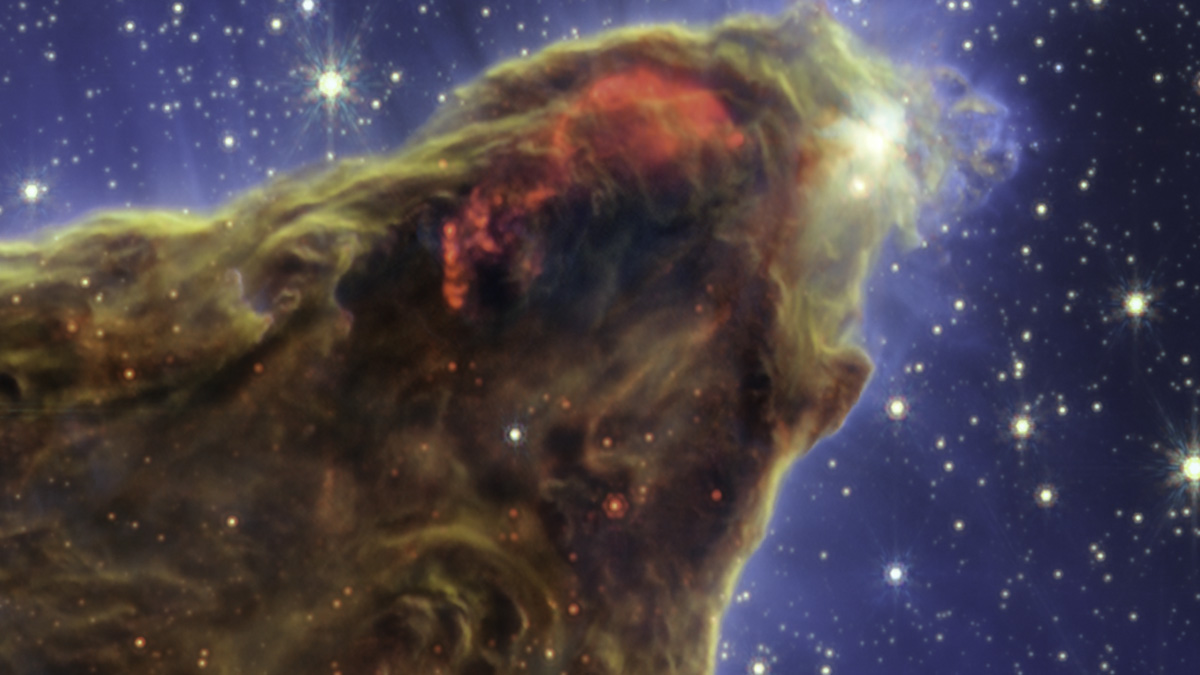 The James Webb Space Telescope took a breathtaking look inside the “Pillars of Creation,” a spectacular dust cloud formation made famous by its predecessor, the Hubble Space Telescope.

The image is not only stunningly beautiful but also reveals cosmic processes never before observed with such clarity. Here is what astronomers see behind the sparkling, colorful tapestry.

If you want to properly take in the magic of the James Webb Space Telescope‘s photo of the Pillars of Creation, you have to download the original image from the website of the Space Telescope Science Institute (STScI) in Baltimore, which manages the mission’s science operations. It’s not a small file. At about 150 megabytes, it might clog your internet downlink for a while. Then zoom into the darkest regions at the tops of the pillars. Zoom in a little more, until you see red dots springing into view. There are dozens of them. The smaller ones are just plain red spots. Others are somewhat larger, resembling flowers with yellow centers surrounded by six red petals, and sometimes with Webb’s trademark snowflake-like refraction patterns.

These floral formations are newborn stars, some of them only a few hundred thousand years old, the creation inside the Pillars of Creation revealed for the first time. For Webb’s predecessor, the Hubble Space Telescope, which observes the universe mostly in visible light (wavelengths that the human eye can see), these pillars were impenetrable, menacing dark formations rising from the Eagle Nebula, a cloudy cluster of stars in the constellation Serpens less than 6,000 light-years away from Earth. But Webb, with its infrared, heat-detecting gaze, peered through the darkness to reveal how light in the universe is being born.

“The most interesting thing about this image is that it’s actually showing us star formation in progress,” Anton Koekemoer, a research astronomer at STScI, told Space.com.

Koekemoer put the stunning image together from raw data taken by Webb’s powerful NIRCam camera. Amazing imagery of the universe is the daily bread and butter for Koekemoer, who previously worked on processing images from the Hubble Space Telescope. Yet the astronomer admits that the texture, level of detail and amount of scientific information contained in Webb’s photographs stuns even him.

“I’m amazed at how well Webb can see into the dust and gas that is completely dark with Hubble,” Koekemoer said. “With Hubble, you don’t see any detail at all. But Webb, with its infrared vision, can penetrate directly into these regions and see the stars forming inside those dusty pillars. It’s extremely exciting.”

Professor Derek Ward-Thompson shares Koekemoer’s excitement. A veteran astronomer and head of the School of Natural Sciences at the University of Central Lancashire in the U.K., Ward-Thompson has published several scientific papers about the Pillars of Creation over the years, including a few about the powerful magnetic fields that hold the formation together. Yet, he says, his first thought when seeing the first Webb image of his favorite cloud of cosmic hydrogen was rather unscientific.

“I just thought ‘Wow’,” Ward-Thompson told Space.com. “It really made me understand how the James Webb Space Telescope is going to be so much better than Hubble, which can only see the outside. It also provides a much better detail, much higher resolution.”

Webb’s images, Ward-Thompson said, are providing a unique window into the dark and freezing clouds where stellar embryos are being incubated from a hydrogen-rich dust. For the first time, astronomers can not only theorize about this process but also study it in dozens of examples of various sizes and brightness levels.

“I’m sure that Webb’s images will advance our understanding of how stars form and, hence, where our own sun came from,” Ward-Thompson.

The red dots visible in Webb’s images are protostars, cocoons of dust and gas so dense that they are collapsing together under the weight of their own gravity. As the clouds collapse, they form rotating balls, which will eventually become so dense that the hydrogen atoms in their cores will begin to fuse together in the process of nuclear fusion, which makes stars shine.

The protostars that Webb sees are not fully there yet, only beginning to glow in the infrared light as they warm above the coldness of the surrounding cloud, which is no warmer than minus 390 degrees Fahrenheit (minus 200 degrees Celsius), said Ward-Thompson.

In some of the larger bright red patches in the image, several stars are bursting out at once. Elsewhere, their heat has not yet broken through the surrounding dust.

The Pillars of Creation are one of the closest regions of active star formation to Earth, which means that in combination with Webb’s imaging powers, the site provides the best opportunity to study star-forming processes, Ward-Thompson said.

Each of those red dots that you can only see when you zoom into the image covers an area larger than our solar system. The whole image, 15,000 pixels wide, captures an area some 8 to 9 light years-across.

“You can resolve things that are about the size of our solar system in the image,” Koekemoer said. “If there were individual planets like Jupiter, you wouldn’t be able to resolve those.”

The image, which Koekemoer assembled from data taken by NIRCam in six different filters, shows the Pillars in different colors than they would appear to the human eye. The only wavelength in the image that the human eye would detect is that of the color red, which is represented as blue in the image

“The yellowish, greenish and ultimately orange and red colors go to the mid-infrared wavelengths,” Koekemoer said. “The longest wavelengths in this image are six times longer than the human eye could see.”

With each color, a different component of the physical processes taking place in the stunning nebula appears. The bluish wisps of gas and dust that emanate like thin veils out of the nebula’s edges are clouds of ionized hydrogen — hydrogen electrons stripped from the colder atomic hydrogen forming the dark dense clouds by intense ultraviolet light streaming from nearby massive stars.

Ionized hydrogen billowing out of the dense clouds of molecular dust that forms the Pillars of Creation. (Image credit: NASA, ESA, CSA, STScI)The physics behind the pillars

With Webb’s ability to reveal the structure of the dust clouds with unprecedented nuance and texture, astronomers will also be able to study the processes that sculpted the towering clouds over millions of years.

“The material that the pillars are made of is what we call the interstellar medium, the medium between the stars,” Ward-Thompson said. “It becomes more transparent as you go to longer [infrared] wavelengths. The Hubble images told us only where the material was, but Webb now shows us where it’s thicker and where it’s thinner. It’s almost like making an X-ray of a human.”

Astronomers know that the Pillars are not a stable cosmic sculpture but rather a constantly changing flow of material, similar to the constantly changing surface of a sandy beach. What shapes the pillars are powerful stellar winds emanating from a cluster of large stars, which is not visible in this image, Ward-Thompson said. Strong cosmic magnetic fields hold the clouds together, protecting them from being dispersed by the stellar winds. Still, within several million years, the Pillars will no longer resemble the iconic images that we see today.

For Webb, the Pillars are still just the beginning, providing only a glimpse of what the $10 billion telescope can accomplish, Koekemoer said.

“Everybody in the astronomical community is very excited about what the future holds for Webb,” Koekemoer said. “I think there’ll be many more observations coming down the road that will show us even more about how stars and galaxies are forming.”